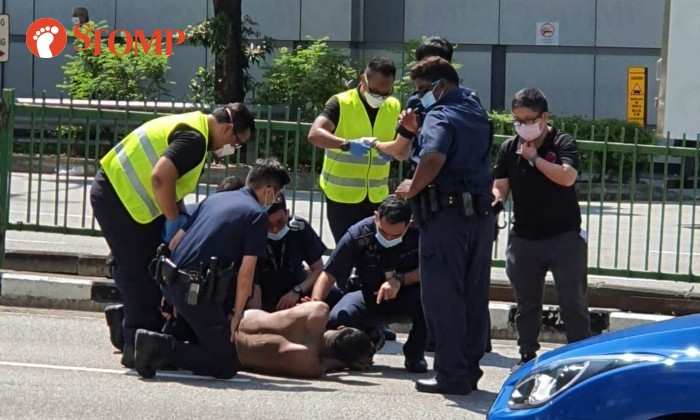 A 28-year-old man, who was wanted by the police, caused a scene by assaulting two police officers and had to be tasered at Esplanade Drive on Friday (Aug 21).

A Stomper alerted Stomp to the incident and shared photos and videos of what happened.

The police said officers spotted the man "walking about aimlessly and in a dangerous manner" at around 10.30am.

When the man was approached to be guided to the pavement for assistance, he was "uncooperative and incoherent".

The police added that the man "started to gesticulate and speak loudly while continuing to walk in the middle of the road".

This time when the officers attempted to pull him onto the pavement, he resisted and acted violently.

The man then charged at one of the officers despite being reminded to comply with the instructions given.

An officer used a taser in hopes of subduing the man, but the taser was rendered ineffective as one of the probes of the taser was dislodged.

As seen in a viral video that has been circulating on social media over the weekend, the man fell to the ground after being tasered, but quickly got back on his feet and ran away from the officers.

In the process of getting away, he even striked an officer in the face.

He then ran towards the middle of the junction while taking his shirt off.

"The officers caught up with the man and he was eventually subdued when a second round of taser was deployed," the police added. 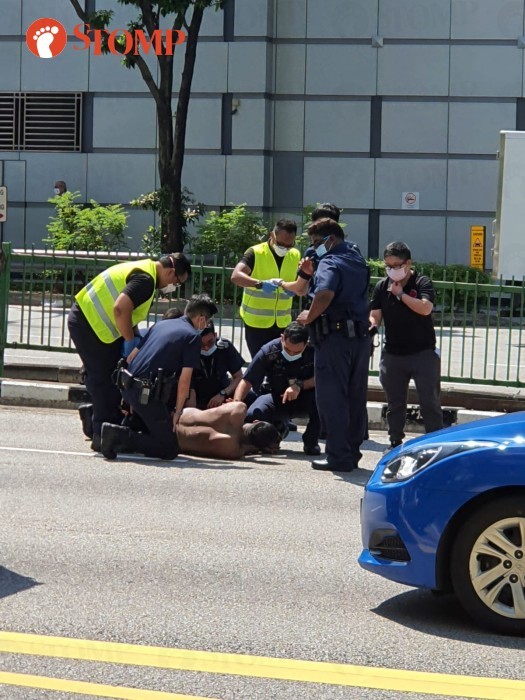 By then, the man had already assaulted and injured two police officers.

The police said in a statement on Friday evening (Aug 21) that the man was arrested for disorderly behaviour, voluntarily causing hurt to public servants and alleged consumption of controlled drugs.

He was also wanted for an outstanding warrant of arrest.

The police also added that the officers "did not want to use so much force as to hurt the target" and "have chosen to err on the side of taking consideration of the target’s safety where they can".

Here is the full police statement:

View more photos taken by the Stomper in the gallery.

Related Stories
2 men arrested for assaulting police officers who were alerted to Jurong West dispute
Man, 20, arrested for voluntarily causing hurt by dangerous weapon after dispute on bus
3 arrested for attack on youth who was ambushed while going to meet GF's ex-lover
More About:
arrested
taser
police
violent
assault