'Wait for your family to die': Woman who spat at KFC staff during circuit breaker pleads guilty 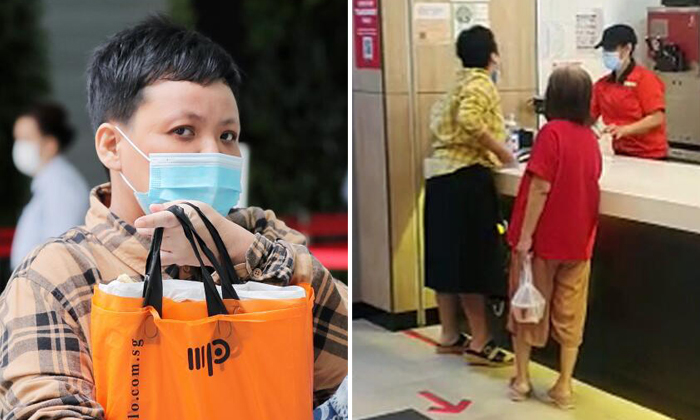 A woman who was caught on video spitting at KFC staff last year was convicted on Thursday morning (Jan 28).

Lin Si Ting, 43, pleaded guilty to one count each of harassment and using criminal force on the staff.

A third charge under the Covid-19 regulations will be taken into consideration for sentencing.

At about 12.40pm on April 22 last year, Lin went to the KFC outlet at Nex Shopping Centre and placed her order at the counter.

After just six minutes, she approached the counter again and shouted at the staff, asking why her order was taking so long and demanding that it be served to her immediately.

The service manager, a 40-year-old woman, apologised and explained to Lin that there were orders ahead of hers.

She told Lin to wait about five more minutes for her food.

The accused became unhappy, and demanded a refund if she was not served her food immediately.

The service manager agreed to give Lin a refund and asked for the receipt, which the accused threw at her.

While the refund was being processed, Lin pulled down her mask and spewed a string of vulgarities at the staff.

She also pointed at the service manager and said: "Wait for you to die, wait for your whole family to die."

She then spat at the victim twice, with the spittle landing on the woman's arm.

Lin took her cash and walked off.

But a few minutes later, she went back to the KFC and claimed she had been refunded less than what she had paid.

The victim checked the order records and confirmed that the refunded amount was correct.

Lin again shouted at the victim as other staff called the police.

She left before the police could arrive.

The court was told Lin has schizophrenia and is receiving treatment.

On Thursday, District Judge May Mesenas called for a report to determine Lin's suitability for a Mandatory Treatment Order (MTO).

The accused is expected to be back in court on Feb 25 for sentencing.

The offence of causing intentional harassment carries a fine of up to $5,000, a jail term of up to six months, or both.

Lin can also be jailed for a maximum of three months, or fined up to $1,500, or both, for using criminal force on a person.

Related Stories
Woman who spat on KFC employee, cursed her and 'whole family to die' gets charged in court
Arrested: Woman who cursed and spat at KFC employee after being told to wait for her order
Woman shouts and spits at KFC staff manager at Nex, police investigating public nuisance
More About:
KFC
Covid-19
court