Wagler's pit viper spotted at Rifle Range Nature Park: How to tell it's a female 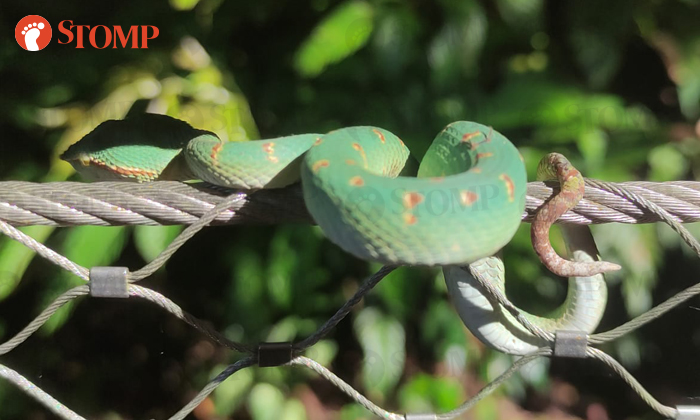 How good are you when it comes to spotting wildlife?

Stomper Steven has a pretty keen eye for such things.

Stomper Anon shared a photo of the reptile and said: "This viper was found near the left side of a pavilion.

"Someone even put a toy near the snake and took photos, which is very dangerous as it's venomous.

"It's the first time I have spotted a viper here but I have also come across wildlife such as crocodiles, sambar deers, lesser mouse-deers and other snakes at Sungei Buloh Wetland Reserve, Windsor Nature Park, Chestnut Nature Park and other places."

Based on the markings seen on the snake spotted by Steven, it is believed to be a female Wagler’s Pit Viper.

How can you tell?

The male viper stays small and retains its juvenile colour pattern of green with red and white spots or short bars along its back and a red-and-white stripe along the sides of its head in adulthood.

Meanwhile, the female viper may grow up to 1m in length and undergoes a complete colour pattern transformation, with green spots, yellow bands and a greenish white underside with yellow patches.

According to the National Parks Board, this is a nocturnal species that can be found be in the forests of Bukit Timah, Central Catchment Nature Reserves and on Pulau Tekong.

Pit vipers are all venomous, but the Wagler's pit viper is generally not considered to be aggressive.

Members of the public are advised to leave snakes alone and observe them from a safe distance.

More info about the Wagler’s pit viper can be found here.