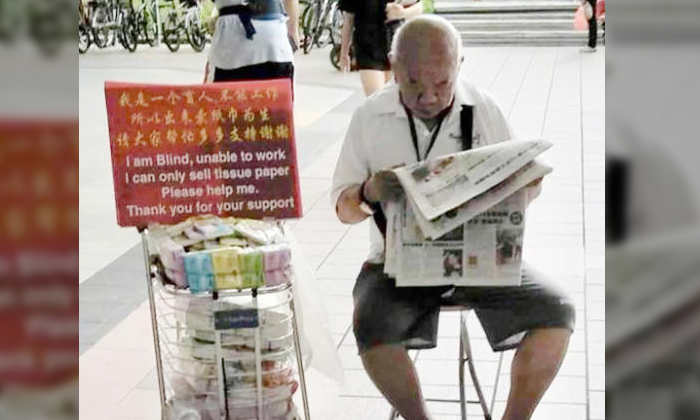 An elderly tissue seller who was photographed reading the newspaper despite having a "I am blind" sign next to him has spoken out with his side of the story.

The photo was first posted in a Facebook group with the caption: "Spot the mistake".

It shows the elderly man reading the papers while seated outside Tampines MRT Station. A trolley of tissues can be seen next to him, along with a red sign that reads:

I am blind, unable to work
I can only sell tissue paper
Please help me
Thank you for your support

The image subsequently went viral on Facebook and WhatsApp, with many netizens pointing out its irony. Some even labelled the man a cheat and accused him of pretending to be blind.

Mr Liu said he has been selling tissues in the area for less than a year, typically arriving just before noon and leaving before 8pm.

When asked about the speculation regarding his eyesight, Mr Liu showed reporters his certification from the Singapore Association Of The Visually Handicapped. 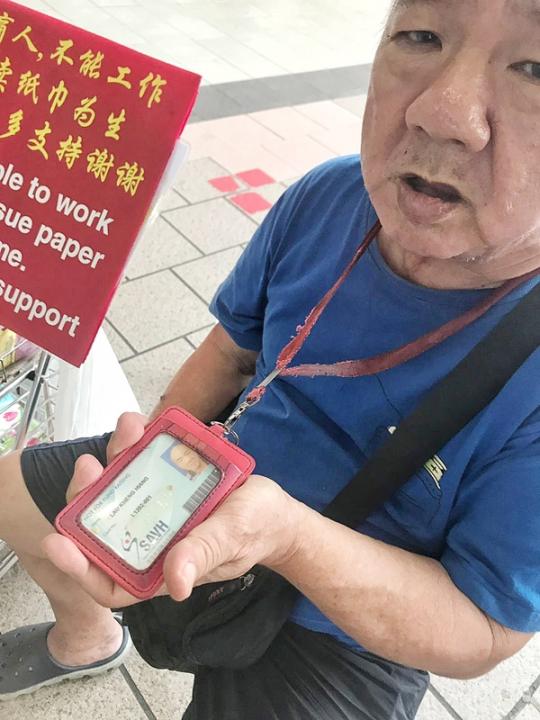 According to Mr Liu, he is completely blind in the right eye, which was injured by a marble in his 20s.

Meanwhile, he experiences weak vision in his left eye due to age deterioration.

As such, it is difficult for him to see in the dark.

Mr Liu enjoys reading the papers when there is sufficient lighting as a way to pass time, though he cannot see every little word clearly.

When told that netizens suspected him to be a cheat, Mr Liu appeared to be at a loss.

He added: "I hope that people will not jump to conclusions without any proof."

Related Stories
Elderly couple chilling at HDB lift lobby for 10 hours daily not homeless, explain why they do it
Elderly man accused of dining for free at Sun Plaza speaks out, reveals involvement in fatal accident
Wheelchair-bound woman, 95, left waiting at Hougang void deck for 6 hours during family dispute
More About:
elderly