Viral videos of men tussling, arguing with police are from 2017 case where 4 men were arrested 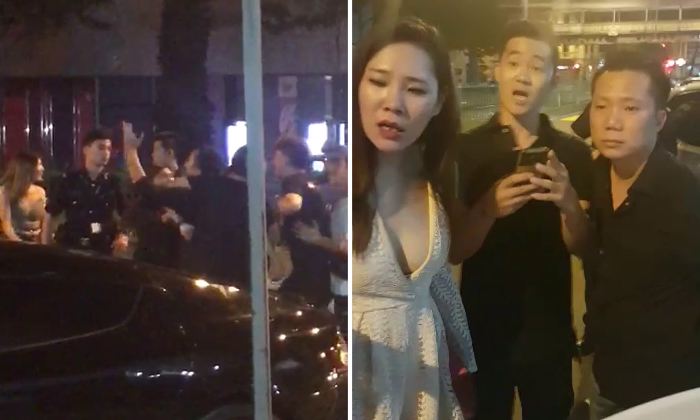 Two viral videos showing a fight among several men in the Dhoby Ghaut area are of an old case from last year, the police told Stomp in response to queries.

The police confirmed today (April 10) that the videos are of an incident that took place outside Peace Centre, a shopping mall located along Sophia Road, on August 27, 2017.

Four men, aged between 22 and 32, were arrested in relation to the incident.

"Two of them were arrested for affray, one for causing public nuisance while another was arrested for disorderly behaviour," added the police.

Stomp understands that the men had been at Club 9, which is located along the same stretch of road. They then got into a dispute over their cars.

The man nabbed for disorderly behaviour had been filming a police officer, whom he also challenged.

The man who caused a public nuisance had been asked by police to leave the scene as he was not involved in the fight, but refused to comply.

Several Stompers alerted Stomp to videos of the altercation, after they started circulating again on WhatsApp and Facebook yesterday (April 9).

In one clip, two groups of men can be seen in a dispute with each other while standing in the middle of the road.

A man is restrained and dragged to the side of the road by others, as he continued shouting at the other group and making aggressive gestures at them.

In the second video, a man is seen arguing with police officers and saying: "Don't touch me. I know the law," when asked for his particulars.

Another guy was later handcuffed by the police and taken away, while his female companion repeatedly said: "Don't use force, can or not?"

Related Stories
ITE responds to video of students fighting outside Simei campus, police investigating
Man beaten bloody in Jalan Besar fight: Victim confronted assailants after GF was allegedly molested
Man who got knocked out in Geylang attack: I just looked at them and they started attacking me
More About:
fight
dispute
police
arrest
brawl