Viral video of substance in Yeo's drink: Here's how product quality was compromised 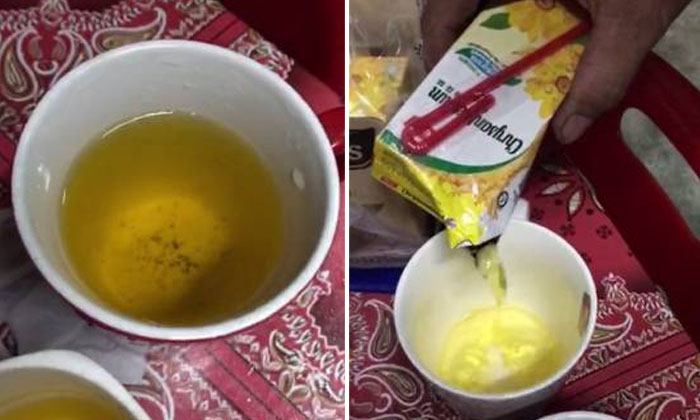 Following up on a previous statement to Stomp regarding a circulated video of a sticky substance found in its chrysanthemum tea packets, Yeo's said that further investigations found that the quality of the drink had been compromised due to rough handling.

After Yeo's was contacted by a relative of the person who filmed the circulated video, they were able to look deeper into the matter.

In the circulated video, a man can be seen pouring out the tea containing the sticky substance and warning people that it is not safe for consumption, especially by children.

In its previous response on Dec 14, Yeo's said that it conducted tests from the same production batch as well as reviewed its production records of the drink shown in the video. It then affirmed that the drinks from that batch was safe for consumption.

In a follow-up statement it sent to Stomp on Dec 24, Yeo Hiap Seng (Malaysia) Berhad (Yeo's) said: "In response to Yeo Hiap Seng (Malaysia) Berhad’s (Yeo’s) request for more information regarding the recent Yeo’s Chrysanthemum Tea video that has been circulating among certain quarters, a relative of the person who filmed the video contacted Yeo’s.

"We appreciate his timely response and willingness to share with us the remaining unopened packets, which enabled us to investigate the matter expeditiously.

"Examination of the unopened packets received from the relative showed that the packets were compressed from the top, badly dented at the top or bottom of the packets, some with cracked marks and one with a puncture at the straw-hole area.

"We believe these packets were likely damaged due to rough handling at the retail level, which then compromised the quality of the content.

"To date, we have not received any feedback on this product batch, save for this incident.

"As reported earlier, our Quality Assurance tests of our samples from this same product batch do not indicate the product conditions shown in the video and the tests affirmed safe consumption of our product.

"Quality control and manufacturing processes on the said batch of products were also reviewed and confirmed that they were in accordance to standards.

"As such, we believe the damaged packaging happened post-production; and from the dents on the packets, it is likely to be due to rough handling at the retail level.

"We have also tracked the products post-production and we believe that this is an isolated incident contained to a single retail outlet in Perak, Malaysia.

"Notwithstanding this, and as a precautionary measure, Yeo’s has voluntarily collected back from the market, all Yeo’s Chrysanthemum Tea with the same product batch code.

"Yeo’s Chrysanthemum Tea is manufactured under stringent international quality and food safety standards and is safe for consumption.

"Yeo’s applies international method of quality assurance such as the HACCP (Hazard Analysis & Critical Control Point) and our factories are certified with Good Manufacturing Process (GMP) to control all potential hazards in food manufacturing processes.

"In addition, Yeo’s Chrysanthemum Tea is made from premium chrysanthemum flowers with no added preservatives. "As such, safeguarding the integrity of the packaging is crucial to retain its quality at optimum levels.

"We advise consumers to check carefully all packaging for any damage or leaks which may be caused by rough handling prior to purchasing products.

"We have communicated the outcome of our investigations to the relative of the person who filmed the video and he has accepted our explanation.  He reiterated his support for Yeo’s products as he is confident of our quality and stringent manufacturing process.

"Offering safe products to our consumers is of paramount importance to Yeo’s.

"We welcome members of public and fans of Yeo’s to contact us should there be any product queries Yeo’s Customer Careline at 1-300-80-2828 or email: publicrelations@yeos.com."