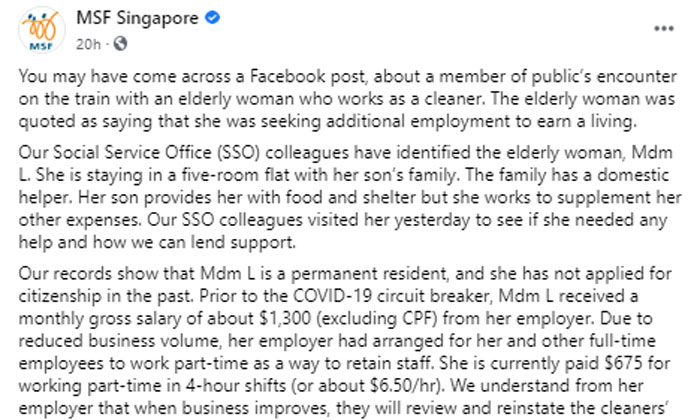 The Ministry of Social and Family Development (MSF) has responded to a viral post by a man who encountered an elderly woman who works as a cleaner.

In the original post that has since been taken down, the man said the woman had asked him for directions from Bedok to Sentosa.

He said she identified herself as an 82-year-old Malaysian citizen and that she told him she was seeking additional employment at Sentosa.

The story garnered attention from netizens with several people going down to her workplace and home to offer the woman assistance.

In a statement on Wednesday (July 29), MSF said the woman has been identified as Mdm L.

"She is staying in a five-room flat with her son's family," the ministry said.

"The family has a domestic helper.

"Her son provides her with food and shelter but she works to supplement her other expenses.

"Our Social Service Office (SSO) colleagues also visited her yesterday to see if she needed any help and how we can lend support."

According to their records, Mdm L is a permanent resident and has not applied for citizenship.

She was receiving a monthly gross salary of $1,300 (excluding CPF) from her employer.

However, due to reduced business volume after the Covid-19 circuit breaker period, her employer arranged for her and other full-time employees to work part-time as a way to retain staff.

She is currently being paid $675 for working part-time in four-hour shifts.

The ministry added that they understood from her employer that when business improves, they will review and reinstate their cleaners' part-time employment to full-time.

It said it is also assessing her eligibility for the Covid-19 Support Grant (CSG) to mitigate the impact of her wage loss during this period. This would provide monthly payouts of $500 to $800.

Grassroots organisations will also support her with $120 food vouchers for the next six months and MSF is arranging for her to get some help for some of her medical expenses.

As she is not a Singapore citizen, she does not qualify for Silver Support or Workfare but she currently receives benefits like the Solidarity Payment, which are also extended to PRs.

The ministry said that although it appreciates the effort of members of the public reaching out to those who seem to be in need, posting and sharing their circumstances on social media may lead to further distress for these vulnerable groups of people and their families.

"Such posts may not correctly reflect the circumstances of vulnerable groups of people, who may be elderly, or may not share all the details accurately because of the stressors they are facing," the statement said.

Instead, it encouraged members of the public to link up such parties with them through their SSOs or any Family Service Centre.

It added Mdm L was unaware she had been photographed or that her comments and photo would be shared on social media.

Former MSF minister Tan Chuan-Jin said in a Facebook post regarding the matter that the elderly woman is "distraught" by all the attention the post has brought to her.

"She said that ever since the post went up she has been harassed at home by people who have been flocking to where she is staying," he said.

"I know many of you mean well. But please stop going to her place of work or approaching her and her family.

"They are in significant distress."