Viral photo of dog with bag over its head in Toa Payoh: Owner explains its unusual get-up 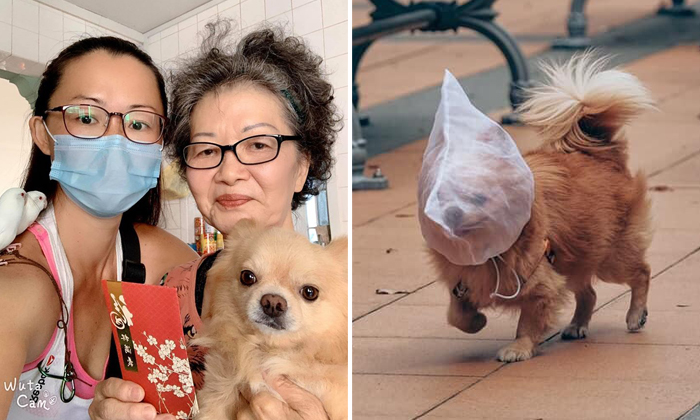 A dog melted hearts online after it was photographed wearing a bag over its head in Toa Payoh — but there is more to the attire than you think.

The adorable pup shot to fame online after a picture of it was featured in a Straits Times article about Covid-19 on April 29.

The dog, which had a bag over its head, can be seen walking in front of its owner, who was riding a bicycle and wearing a face mask.

Many netizens assumed that the dog was wearing a bag over its head to stave off the coronavirus — but that is not the case.

Facebook user Rachel Liaw shared that the chihuahua, named Baby, had been her a gift to her mother seven to eight years ago.

According to Rachel, the 'bag' on Baby's head is a thin, soft and breathable netting to prevent Baby from licking other dog's urine when out on walks.

It is a 'system' that Rachel's mother has had for "quite some time" and "way before Covid-19".

In a Facebook post which she also shared with Stomp, Rachel said: "We never stopped her, even after they came out in the news.

"Because my mum is a very happy old lady, with her very happy and well-loved dog. I don’t have the heart to stop her. And if the dog is uncomfortable as well, the dog wouldn’t walk.

"They are both very happy!"

Although Rachel was initially worried about backlash when the Straits Times article was first published, she is glad it all turned out to be positive.

Rachel added in her post on Monday (May 4): "But both my brother and I, just quietly observing this situation. In hope that no one 'attacks' or creates troubles for my mum. Only should that happen, then both of us will step up, in order not to kill her joy prematurely or unnecessarily.

"We are very glad it all turned out to be a very happy joy! We thank everyone for being so kind."

Rachel's post, which consists of more photos of Baby and her unusual get-up, has garnered over 1,500 likes and 2,000 shares, with many netizens gushing over the cuteness.

Several commented that they would like to use the same netting on their own pets, while one user wrote: "We stan wholesome content."

View more photos of Baby in the gallery.