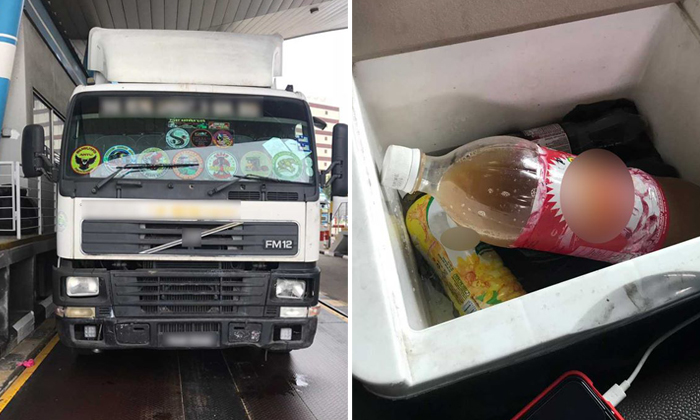 Two Malaysian men were arrested after bottles of brown liquid, which are believed to contain drugs, were found in a lorry at Jurong Port on Dec 10.

The Malaysia-registered lorry had been transporting metal beams, said the Immigration & Checkpoints Authority (ICA) in a Facebook post on Sunday (Dec 23).

Vigilant ICA officers had discovered four bottles of brown liquid, believed to be Kratom, in the lorry. Two other bottles containing remnants of a similar liquid were also found.

The bottles were hidden beneath and behind the driver’s seat.

"Kratom contains 'Mitragynine' and '7-Hydroxymitragynine', which are Class A controlled drugs listed under the Misuse of Drug Act," said the ICA in its post cheekily titled "No time for 'high' tea".

The two men, aged 35 and 38, were nabbed in connection to the case, which has been referred to the Central Narcotics Bureau for further investigation.

"Our borders are our first line of defence in safeguarding Singapore’s security," added the ICA.

"ICA and CNB officers will continue to conduct stringent checks at our borders and will not hesitate to take action against any person who attempt to enter our borders with controlled substances."