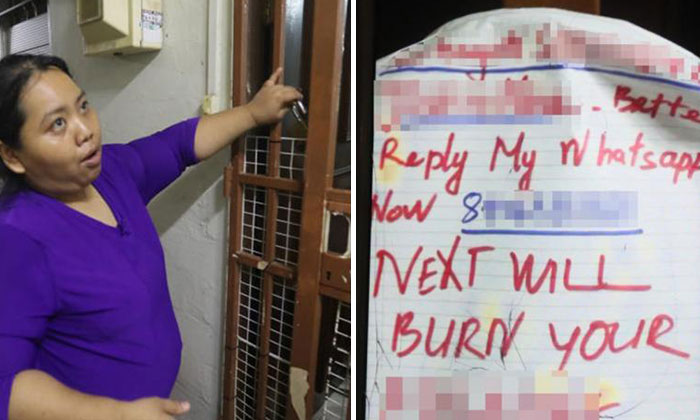 A 31-year-old Vietnamese masseuse turned loan shark was arrested from a beauty salon at North Bridge Road by the police for her alleged involvement in a series of harassment cases.

The police said in an official statement that the suspect was part of a duo who used bicycle chains to harass residents in Toa Payoh and Ang Mo Kio respectively.

Both were quickly arrested and subsequently charged in court on Friday (June 22).

The police received a report on June 16 that someone had used a bicycle chain to harass the occupants of a flat at Block 68 Toa Payoh Lorong 5.

Officers from the Tanglin Police Division established the identity of the female suspect and arrested her from a beauty salon at North Bridge Road.

Preliminary investigations revealed that the suspect, a Vietnamese national, was also involved in other loan shark harassment cases.

Reporters later visited the affected flat in Toa Payoh Lorong 5 and spoke to the occupants.

The owner, 33, who lives in the flat with her father and two children said that she suspected her ex-husband had borrowed money from loan sharks using a photocopy of her identification card (IC).

She received many calls from loan sharks in the last month.

“On the day after Hari Raya Puasa, my father woke up early to go to the market for grocery shopping. He found the metal gates locked with a bicycle chain, and he was not able to open it.”

The owner and her father subsequently called the police. Officers arrived at the scene, removed the bicycle chain, and dusted for fingerprints.

She was later told that the suspect had struck at about 1am on the same day.

The suspect also left a message on the owner’s metal gate, asking her to reply to her on WhatsApp, or she would burn her house down.

The owner said that she did not borrow money from loan sharks and the constant harassment calls have left her feeling hopeless.

She alleged that the person who borrowed the money was her ex-husband, whom she divorced five months ago, adding:

“I believe he used a photocopy of my identification card to borrow the money. I am unable to get in touch with him now.”