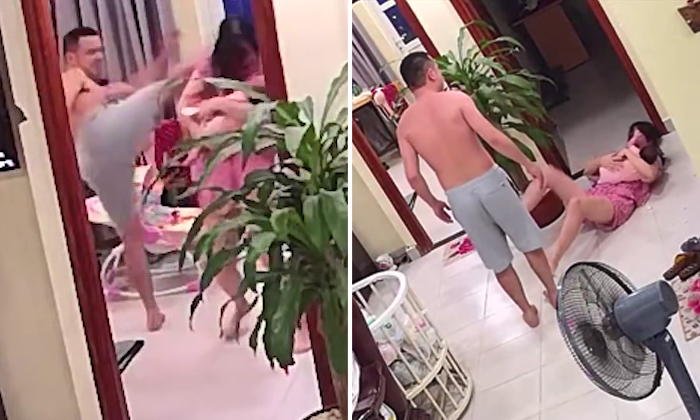 A man in Vietnam was caught on camera pummelling and raining blows on his wife while she carried a two-month-old baby in her arms.

According to The Star, the man has been identified as martial arts teacher Nguyen Xuan Vinh, 32.

An argument between the couple reportedly arose because Vinh was angered about his television set being moved to another room.

In a video that has gone viral online, Vinh can be seen striking Ly multiple times while she was holding her son, in the presence of another woman and a young boy.

The boy later retreated into a room and closed the door behind him under Vinh's instructions, while Ly sat cowering on the floor.

The couple can then be seen entering the room, where Vinh appeared to deliver a high kick at Ly, who was still carrying the infant.

Vinh also hit Ly in the face, causing her to fall on the ground.

Ly subsequently received treatment in hospital, though no arrests have been made yet.

Related Stories
Korean man arrested after beating Vietnamese wife in front of crying son for 3 hours
Jiang Jinfu's model GF reveals more details about abuse: 'When it got serious, he would use a hammer'
Woman beaten with hammer and screwdriver by BF who also sexually assaulted and blinded her
More About:
assault
abuse
couple
Vietnam