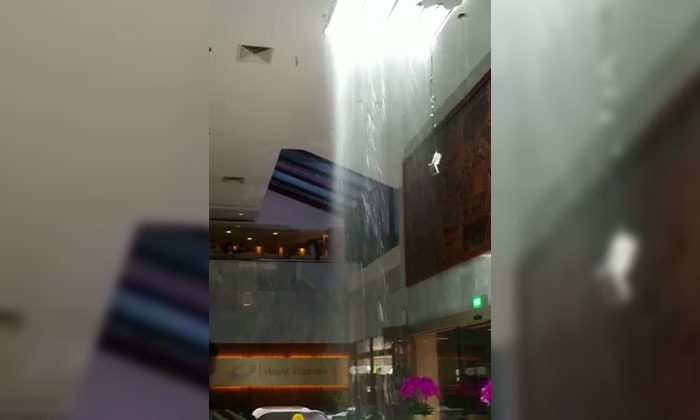 A video of water gushing from the ceiling at Mount Elizabeth Hospital has been circulating online via Facebook and WhatsApp.

The video has been widely circulated and several Stompers alerted Stomp to the video.

There had been speculation surrounding the video, alleging that the roof of the hospital collapsed due to heavy rain.

However, the hospital has come out to clarify that this was not the case. A sprinkler head had burst on Sunday (Sep 17) afternoon, causing a leak at the hospital's main lobby after two ceiling boards that were damaged by the leak became dislodged.

Mount Elizabeth's chief executive, Dr Noel Yeo told The Straits Times, "No one was hurt as the area had already been cordoned off when the leak was first discovered".

He added that the water supply to the sprinklers was shut off within 15 minutes and that rectification works started immediately after.

He emphasised that safety "has always been of paramount importance at the hospital" and apologised for any inconvenience caused to patients and visitors.

*Stomp encourages readers to send us photos and videos that appear dubious before sharing them online. Kindly send them to Stomp via email at stomp@stomp.com.sg or WhatsApp us at 9384 3761 and we will carry out the necessary checks.