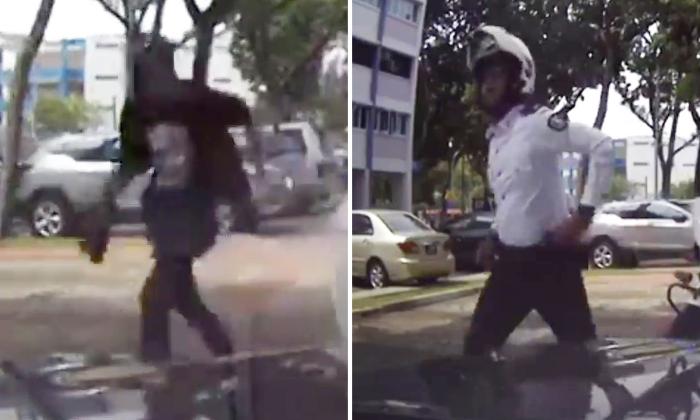 The driver of a BMW with a false licence plate is seen abandoning his vehicle and running away on foot in a new video that has surfaced online.

Stomper Yong Jian had alerted Stomp to the incident that occurred near Block 22 St George's Road on Wednesday morning (Nov 6).

The police told Stomp that they were alerted to two hit-and-run accidents at 11.32am.

Preliminary investigations revealed that a Land Transport Authority (LTA) officer had spotted a vehicle suspected for displaying a false license plate on his car along Geylang Bahru Road.

However, the driver did not stop as instructed and drove off. He hit a taxi along Geylang Bahru Road and later on, collided with another parked car at St George’s Road.

A police spokesman said: "The male driver abandoned the car after the second accident and fled."

In a video that was posted on SG Road Vigilante's Facebook page, the driver can be seen exiting a damaged BMW and letting it crash into the aforementioned parked car.

He then runs away on foot with an LTA officer in pursuit.

The man is still at large and police investigations are ongoing.

When contacted for more information on the offence of switching number plates, the LTA referred The Straits Times to Transport Minister Khaw Boon Wan's reply to a parliamentary question in July.

Mr Khaw had said: "Between 2017 and 2018, there were six persons convicted of displaying false number plates. Three of them received jail sentences of four to nine weeks, while the other three had fines imposed."

He added that it is an offence to display false number plates in Singapore and anyone found doing so may be punished with a fine of up to $5,000 or a jail sentence of up to 12 months, or both.