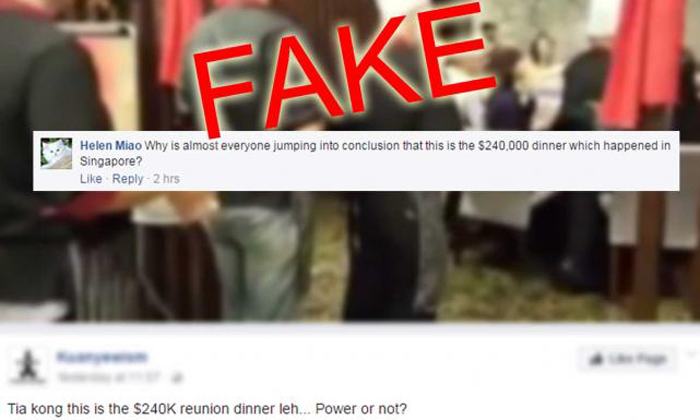 A video which surfaced on social media purportedly shows a family feasting on the infamous $240,000 reunion meal at Feng Shui Inn restaurant at Resorts World Sentosa.

At first glance, the video has all the trappings of an opulent dinner that fits a $240,000 bill: A private room, a massive table, a wide lazy susan surrounding a huge steamer containing Chinese delicacies and seafood.

And to make things more posh, waiters line up in rows to serve guests at the table while a dedicated restaurant staff can be heard describing the dishes through the sound system.

Explains the massive bill that came with the meal? Probably.

Except that the video is not related to Singapore's priciest meal - the latest of such deceptive news flooding the Facebook timelines of unsuspecting netizens, this time leeching on the buzz created by a photo of the $240,000 Feng Shui Inn receipt.

Alert netizens were quick to flag out that the restaurant in the video was serving Taiwanese cuisine, while Feng Shui Inn serves Cantonese cuisine.

The video, which is circulating on Facebook and Whatsapp, has been shared more than 700 times on the former.

A Facebook user by the name PM Koo also shared a video from Youtube showing the exact same video, revealing that the footage was actually shot at a restaurant in Taoyuan, Taiwan.

A restaurant staff can also be heard in the video informing diners that one of the dishes is 'Buddha Jumps Over the Wall', which is absent on the $240,000 receipt.

The decadent meal at Feng Shui Inn restaurant made headlines on Wednesday after a photograph of the staggering bill went viral.

According to Shin Min Daily News, the group of 20 dined at the restaurant for reunion dinner on Jan 27, and dishes ordered include one geoduck clam, which cost over $1,000, and 15 "special" dishes which racked up a staggering $55,320.

The diners also splurged $72,000 on two bottles of Chinese Moutai liquor, and $61,000 on five bottles of top-ranked French wines.