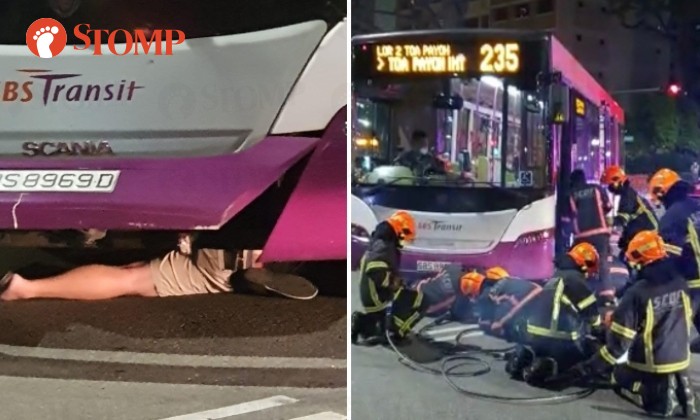 The Singapore Civil Defence Force (SCDF) personnel were seen rescuing a pedestrian who was trapped under an SBS Transit bus after an accident at the junction of Toa Payoh Lorong 6 and Toa Payoh East.

The collision, which happened on Nov 11, led to a 52-year-old male pedestrian getting trapped under the bus.

A video recently emerged showing SCDF personnel rescuing the man from under the bus.

In the video, SCDF personnel can be seen working together and trying to recuse the man.

An ambulance and a number of policemen can also be seen at the scene of the accident.

According to Chinese-language newspaper Shin Min Daily News, the man was trapped for about 15 minutes before he was rescued by SCDF personnel.

Witnesses at the scene said the victim was crossing the road with a shopping trolley and the bus was turning right when the accident happened.

In response to a Stomp query, a spokesman for SCDF said they were alerted to the road traffic accident at 10.42pm and conveyed one person to Tan Tock Seng Hospital.

The police also said in a statement that the 52-year-old man was conscious when conveyed to Tan Tock Seng Hospital.

Ms Tammy Tan, Senior Vice President of Corporate Communications at SBS Transit, said in response to a Stomp query that they are in touch with the pedestrian's family.

"We are also assisting them in any way we can as he recuperates," added Ms Tan.

"We are deeply sorry for the accident and are assisting the police in their investigations."