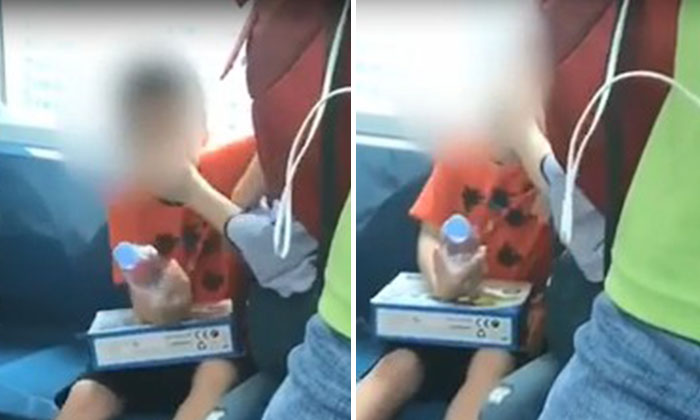 A video of a woman forcefully covering the mouth of a child, and pushing his head against the seats on an MRT train was uploaded by Facebook user Tyronne Tong on Friday (Dec 8).

The video has since garnered more than 148,000 views and sparked a fierce debate among netizens.

Some netizens assert that the woman has gone overboard in her approach to disciplining the child, compounded with the fact that it was done in public.

One such advocate, Tyronne himself, slammed the woman and equated it to abuse.

“There’s a difference between disciplining your child and abusing at such a young age.

“P.s this was going on for more than 10 minutes and I only managed to get two clips of it.

“Throughout the 10 minutes, she was literally sending (a) barrage of punches to the kid.

“Let me enforce, PUNCHES NOT SLAPS.”

Tyronne also emphasised that many passengers tried to intervene during the process.

According to him, some passengers warned and even scolded the woman, but she simply continued disciplining the child.

Another netizen voiced out his concerns:

“True enough. But there's always other ways to discipline a child no matter how hard it is.

“But never ever ever ever do it in public. It will affect the child mentally. It might not be now but when he grows up, it might cause a trauma even small little things like shouting at them in public.

“Get help. In Singapore, there are courses and specialist to help deal with difficult children.”

Tyronne’s post, however, has irked some netizens, who feel that this was a domestic matter, and the mother has every right to discipline her child.

A netizen disagreed that the treatment was too harsh, adding:

“You call this abuse?

“You have no idea what my mum did to me back then. Chairs and things nearby were thrown at me and my sisters, got pinched till blue-black.. slapped our faces.. without all that, I won't be who I am right now.

“I gotta thank her for all that. I am a mother myself.. my children are like small monsters. No matter how soft and nice you speak to them, they won't obey or listen. It’s tiring and frustrating for mothers like us.

“Which mothers don’t love their own child? We went through labour to give birth to them.. why would we wanna see them hurt? Yes, we are angry at that point in time. you may never know when she's home when the kid is sleeping.. she would say to him.. sorry for treating you that way but you gotta learn.

“Once you're a mother.. kids are your priorities. You want the best for them. Don't expect everyone to be the same in disciplining their children.”

The captions in the video were added by Tyronne himself.

Related Stories
Man jailed for dangling baby out of 15th storey window -- just to get Facebook 'likes'
Woman brutally flogs child until she is wincing in pain and struggling to breathe
Chinese teacher brings punishment to another level by whipping students with extension cord
More About:
controversial
parent
child abuse
displine