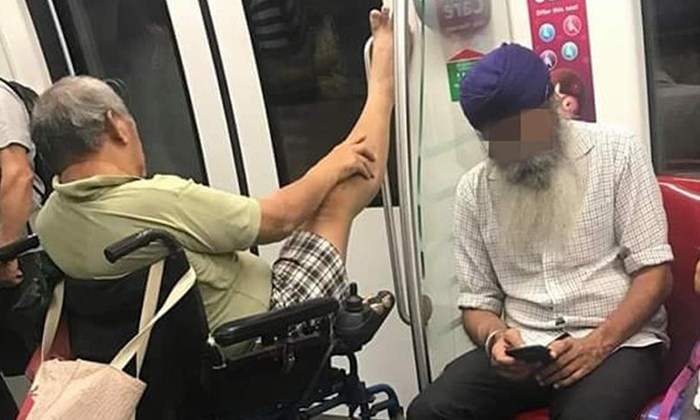 A video of a Personal Mobility Aid (PMA) rider propping his feet up against an MRT door has sparked a heated discussion among netizens.

According to Lianhe Wanbao, the video was posted online last Friday afternoon (Sep 20).

In the video, an uncle, who appeared to be in his 60s, can be seen positioning his PMA to face the MRT doors upon entering the train.

When the train was on the move again, the uncle stretched out his right leg and propped up his bare feet against a handrail at the train door.

Although commuters around the uncle noticed his actions, nobody intervened, reported Wanbao.

Netizens have slammed the uncle for being 'inconsiderate' and 'uncivilised'.

Pointing out the close proximity between the PMA rider's feet and the handrail, they said it would be unhygienic if unsuspecting commuters grabbed onto the handrail.

Some even expressed concerns that the uncle might accidentally activate the emergency button with his feet, thus affecting the whole train.

Meanwhile, a few netizens also questioned how the uncle had the strength to prop his feet up at such a height and yet needed a PMA to help him move around.

Related Stories
Guy sits on PMD in train on East West Line: "He was hogging up a lot of space"
Excuse me, seats on public transport are not for your legs or luggage
Commuter puts legs on seat while sitting beside sign that disallows this act: 'So big sign, can see right?'
More About:
MRT
train
inconsiderate
elderly
pmd