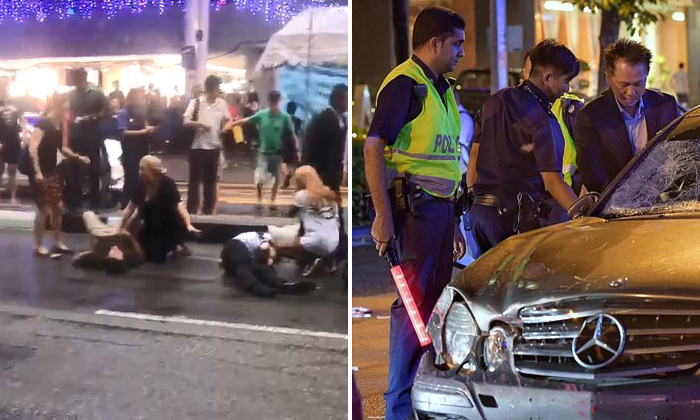 A 41-year-old Mercedes driver was arrested for suspected drink-driving after his car ploughed into four pedestrians at Tanjong Pagar.

Stompers Lim and Jane both sent in photos and videos of the accident, which occurred just outside Amara Hotel at 6.30pm yesterday. (Dec 7)

The video that Stomper Jane sent shows the aftermath of the accident where three men and a woman were lying motionless on the ground while passers-by attended to them.

Another video that was sent in shows several ambulances at the scene and that a huge crowd had also gathered. In one of the photos, paramedics were seen loading the injured on stretchers.

In a statement, the police said, '“On 7 December 2017 at 6.29pm, the police were alerted to an accident involving a car, a taxi, a lorry and four pedestrians along Tanjong Pagar Road. Four persons were conveyed to Singapore General Hospital."

According to The Straits Times, the Singaporean woman suffered lacerations and abrasions.

Two of the men were also Singaporean. One was admitted to intensive care for observation while the other suffered a fractured nose.

The fourth, an Australian, is believed to have a spinal cord injury.

Mr Theo Ofori, 30, a tourist from Ghana, said the accident happened right in front of him. He said the Mercedes appeared to have lost control when it hit the pedestrians.

After it collided with the lorry and hit the pedestrians, the car then knocked into a Trans-Cab taxi.

"They were thrown to the ground. One was bleeding severely from the head after the accident," he said, adding that ambulances arrived within five minutes of the accident.

Mr Murali Tamilselvan, 35, who works in the hotel industry, was eating at a restaurant nearby when the accident happened.

"I heard the sound of tyres screeching and a loud bang, then people screaming," he said.

Another eyewitness, a 30-year-old French woman who declined to be named, said: "I was shocked. The Mercedes drove onto the road divider and just knocked into the four people standing there."

Related Stories
5 arrested at St James and 2 arrested along Telok Blangah Road for various offences in joint operation
Man, 46, arrested for drink-driving after collision that left another car stranded on divider at East Coast Rd
1 dead, 13 injured after bus from Singapore rams into back of trailer on North-South expressway
More About:
accident
drink-driving
Tanjong Pagar