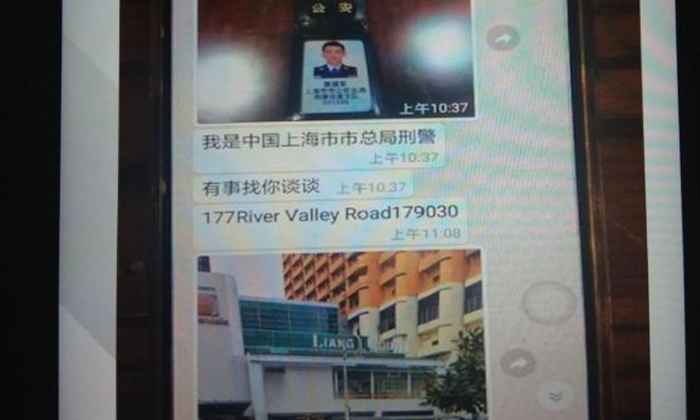 Mr Soh panicked when he got a call, purportedly from Singtel, telling him his mobile account was going to be terminated, as he had been implicated in a crime.

The 33-year-old Malaysian, who was working in a wholesale company, headed to Liang Court to transfer $1,200 on the instruction of an "official" from China, and was about to do so when two police officers at the mall noticed his frantic demeanour and approached him.

Luckily, their intervention prevented him from becoming another victim of "Chinese official" scams and losing the money.

Figures released by the police on Monday (July 1) showed that there were 65 such cases in Singapore between January and April involving at least $4.8 million, prompting the police to say that the Chinese official scam was making a return. Just over $48,000 of this total was lost in scams involving bitcoin machines, which police said are gaining traction as vehicles for fraudsters.

Most of the victims - such as Mr Soh, whose full name was not given - were Chinese.

"Mr Soh was behaving in a very panicky manner," said Mr Chang Lian Seng, the deputy in charge of Orchard NPC community policing unit. "After withdrawing money, he rushed to the bitcoin machine; that was a telltale sign."

Speaking in Mandarin, Mr Soh said that in future, he would "first verify if such a thing actually happened before making a decision".

Others have not been as lucky as Mr Soh.

Last year, a Chinese student in Singapore lost her entire savings of $22,500 when she provided her one-time password and access to her bank account to a scammer.

In 2017, a woman lost $5.4 million after she was led to believe she had to surrender all her money to "Chinese officials" to assist in investigations.

In their advisory on Monday, the police said that the Chinese official scams typically involve scammers who claim to be employees of courier companies or officers from government organisations.

They would tell victims that either a mobile number registered in their name was involved in a crime, a parcel under their name containing illegal goods had been detained, there was a pending court case against them or they had committed a criminal offence and were required to assist in investigations.

Scammers would ask the victims who received the calls to provide their personal details and bank account information, such as Internet banking credentials and one-time passwords for investigation purposes.

In some of these cases, the call would be transferred to another person claiming to be a police officer from China.

Victims may be shown a copy of a warrant for their arrest from the Chinese police and could be threatened with imprisonment if they did not cooperate.

The victims then find out that money was transferred from their bank accounts to unknown accounts.

There is also a variant of the scam, which involves scammers instructing victims to scan a QR code at bitcoin vending machines and transfer a sum of money using the machines.

In several cases, victims were told to withdraw money from their bank accounts and hand it over to a "government officer" for verification purposes.

The scammers kept the victims on the phone line to ensure that they did not have the opportunity to verify the authenticity of the calls, noted the police.

The police advised the public not to panic when they receive such calls, as no government agency would request personal details or a transfer of funds by phone.

Anyone wanting to submit information about such scams can call the police hotline on 1800-255-0000.