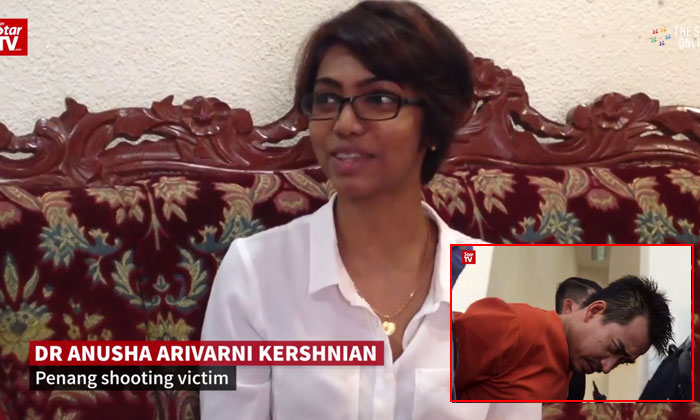 "I even overheard my brother in a conversation with my mother, telling her that I was going to die."

This was what Dr Anusha Ari­var­ni Kershnian, 33, heard after she was shot in the head and sent to the hospital.

But she defied the odds and mi­­raculously survived to tell the tale.

A month ago, Dr Anusha was driving along Tun Dr Lim Chong Eu Express­way heading for the Penang Bridge after meeting a friend ear­lier.

"A stray bullet went through the windscreen and hit my forehead," recalled Dr Anusha in an interview at her home yesterday.

She called her friends at the Penang Hospital and her family as she drove towards Penang Bridge.

A motorist, who came to her aid when she stopped near the midspan of the bridge, drove her to meet her brother who was waiting to rush her to the Seberang Jaya Hospital.

"I was still conscious then," Dr Anusha said, adding that she was later transferred to the Penang Hospital where a neurosurgeon removed the bullet.

A scan earlier showed that the bullet did not reached her brain but was lodged within the skull, she said.

Five days later, the eldest of three siblings who graduated from Mela­ka-Manipal Medical College and now training to become a cardiac surgeon, was discharged from the hospital.

Dr Anusha's mother P. Amutha­valli, 53, said she only came to grasp later why her daughter had called her that day.

"It could have been our last conversation but I am most happy it was not. From now on, I am not letting her drive alone, especially at night," she said.