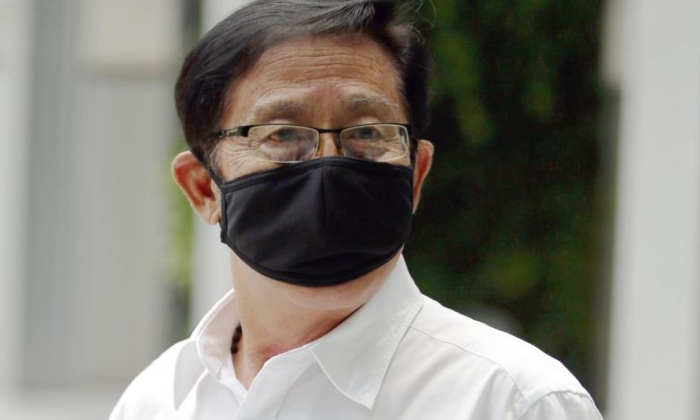 Veteran track and field coach Loh Siang Piow was on Wednesday (July 22) sentenced to 21 months' jail for molesting a teenage athlete twice in 2013.

The 75-year-old, better known in the sports fraternity as Loh Chan Pew, was last month found guilty of using criminal force on the female athlete when she was 18 by rubbing her genitals on two occasions while massaging the back of her thighs.

Loh appeared expressionless as the sentence was announced, and is expected to file an appeal.

District Judge Marvin Bay said: "There is a deeply egregious abuse of trust here. Young trainees are placed in the care of coaches with the legitimate expectation by the trainees, their parents and the public that they will be protected from harm and exploitation.

"It is clear that the court must take a firm stand against offences committed against young persons who are placed in vulnerable situations where they may be susceptible to sexual exploitation or violations by the very persons entrusted with their welfare."

Both incidents were said to have happened at the old Tampines Stadium on two Sundays between January and March 17 in 2013.

During the trial, which began in 2018, the court heard that Loh touched the victim's groin over her tights as she lay on a bench during a massage after a private training session.

At another session, the victim said Loh had asked to massage her and she turned him down. But she relented after he persisted as she felt that he was her coach and "had authority over her".

She was led to an equipment room, whose door was closed, and Loh was said to have rubbed her genitals over her tights during the massage for some 10 to 15 seconds before she told him to stop.

The victim said he told her to "just relax" and when she squeezed her thighs to stop him, he continued to touch her and she experienced a "sick feeling".

Judge Bay noted that the sentence for the second charge must be "significantly heavier" than that for the first charge, given that it involved a "comparatively prolonged event" and "extensive intrusion of (the victim's) vaginal area".

The girl submitted an impact statement, which was read out to the court. She said in the statement that the experience of going to trial was "a hundred times more torturous than the experience itself".

"I thought speaking up would be the right thing to do. I never imagined that this would turn into such a nightmare," she added. "I hope more can be done to protect victims of sexual assault who speak up."

Deputy Public Prosecutor Gail Wong had earlier urged the court to jail Loh for at least 24 months for both charges, citing factors, including abuse of authority and trust, premeditation and a "patent lack of remorse" on Loh's part.

In mitigation, defence lawyer Victor Lee highlighted his client's otherwise good character and medical conditions, among other factors, and sought a jail term of five to six months for the first charge and seven to 10 months for the second, with both to run concurrently.

Loh, previously deputy superintendent of prisons, was a former national sprinter and coach of 35 years. He also used to be a vice-president of Singapore Athletics, which governs the sport here.

Judge Bay noted Loh's medical conditions, and expressed confidence that the Singapore Prison's medical services will provide a high level of care in managing these conditions.

For each charge of outrage of modesty, Loh could have been jailed for up to two years and/or fined. He cannot be caned as he is more than 50 years old.

Related Stories
Jail for man who molested daughter when she was 14 and caused her to contemplate suicide
Jail, fine for massage therapist who touched woman's breasts and intimate parts to 'prevent cancer'
Doctor accused of pulling down patient's bra cup and touching her breast at clinic
More About:
court
jailed
molest