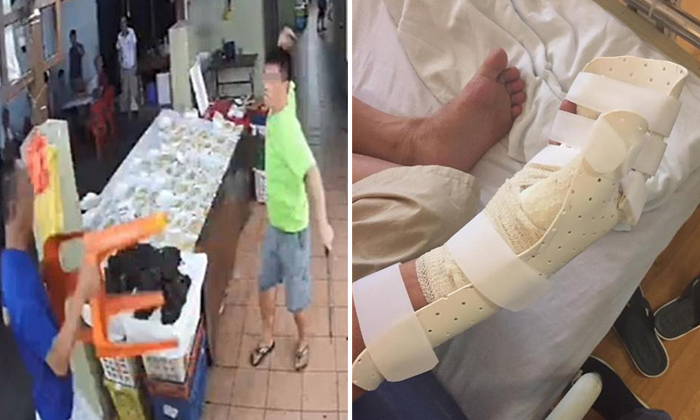 A dispute between two men at Block 372 Bukit Batok Street 31 culminated in one of them wielding four knives and the other having his fingertip cut off.

The incident occurred at a vegetable stall on June 30, at around 9.50pm.

It was earlier reported that a 50-year-old man had been arrested in relation to the case of voluntarily causing grievous hurt with a dangerous weapon against a 53-year-old man.

The suspect, who allegedly cut off the victim's right middle fingertip, was charged in court on Thursday (July 4).

An employee working in the vicinity told Shin Min Daily News that the victim had been playing chess with four to five friends prior to the assault when the suspect, a vegetable stall vendor, went up to talk to them.

It is unclear why the suspect and the victim got into a dispute.

The employee said: "They were speaking in Hokkien, and their argument got louder and louder.

"The vegetable seller suddenly left the scene and walked towards the nearby market. He then went to his stall and took out four knives, both big and small, before rushing back angrily."

A video that a reader sent to Shin Min shows the suspect appearing with four knives. He then threw one of them aside and walked towards the victim.

The victim can be seen picking up a red chair next to him for self-defense, only for the suspect to continue coming closer with a knife in each hand.

The suspect then pointed the knives at the victim while continuing to scold him, before swinging for his target.

However, the suspect was apparently so agitated and used so much force that one knife flew out of his hand. A 30cm fruit knife remained in his other hand.

Shortly after, the two parties appeared to reach a consensus.

The suspect put down his fruit knife while the victim released his chair.

Their reconciliation was short-lived, however, as the suspect swung for the victim again for some unknown reason.

The victim tried to dodge the blow but did not react in time and had his fingertip cut off.

Even then, the suspect reportedly refused to back down and continued wielding his knife.

The commotion lasted for around five minutes before the suspect was pulled away from the scene and someone called the police.