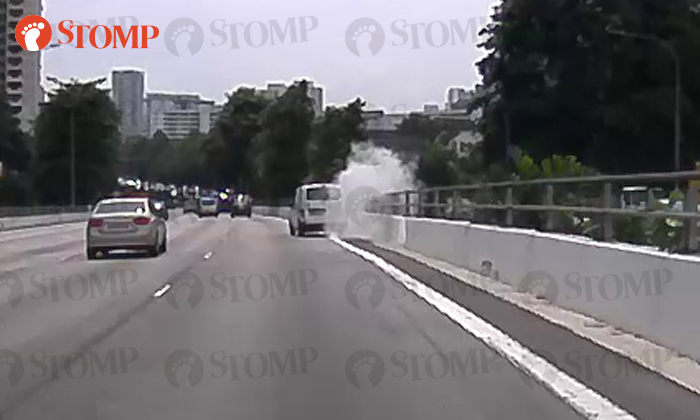 A van was seen going towards a road barrier on its right and crashing into it on Aug 5.

Stomper Samy caught the incident on video and said it occurred along the Central Expressway, towards the Seletar Expressway, at around 11.30am.

A video that Samy submitted to Stomp shows how the van appeared to veer right for no apparent reason, before crashing into the road divider.

Said the Stomper: "The driver kept going after the accident. Not sure whether he was aware of what he had done.

"He might have eventually stopped as I later saw that he was flashing his emergency lights.

"I am not sure if the police or an ambulance were called since I was in the fast lane and didn't want to switch lanes due to heavy traffic.

"This is the first time ever that an accident happened in front of my vehicle.

"Luckily there were no other cars involved and I'm glad my vehicle was a good distance away."

Related Stories
This is why you shouldn't cut across multiple lanes
1 taken to hospital after accident involving 2 cars along PIE
Car skids and hits wall along KJE, no injuries reported
More About:
accident
reckless driving