Banned driver speeds off after seen using phone in van, gets into accident with lorry, found with 'illegal' passenger 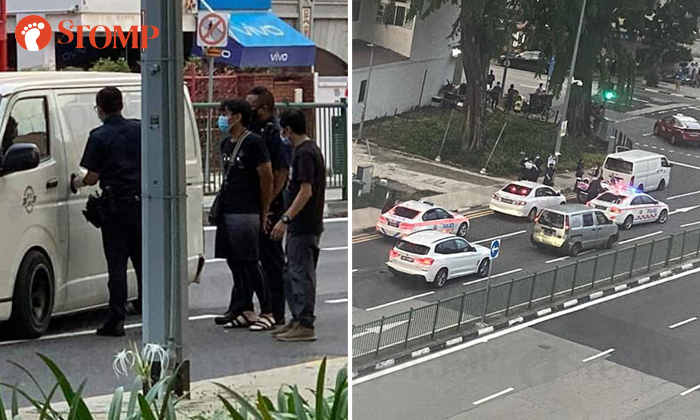 A 27-year-old van driver was arrested for multiple offences after a police car chase, during which he got into a traffic accident with a lorry, in Geylang on Tuesday afternoon (May 5).

A traffic police (TP) officer had noticed the van driver using his handphone while driving along Sims Way towards Mountbatten Road at 4.57pm, said the authorities.

"The TP officer signalled for the driver to stop his van but he refused to comply with the officer’s instruction and sped off instead," the police told Stomp in response to queries.

"In the ensuing pursuit, an accident involving the van and a lorry occurred at the junction of Guillemard Road and Lorong 22 Geylang."

A police spokesman added: "The driver was arrested for dangerous driving and for driving whilst under disqualification.

"He is also being investigated for using a mobile communication device while driving, driving without a valid insurance and breaching safe distancing measures under the COVID-19 (Temporary Measures) (Control Order) Regulations 2020."

A 33-year-old female passenger, who does not stay in the same place of residence as the van driver, was also issued with a Notice of Composition for breaching safe distancing measures.