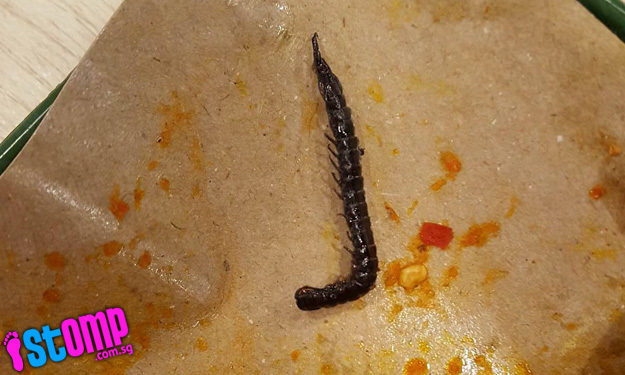 Stomper Mohamed's wife was horrified when she found a centipede in the nasi padang she had ordered from a restaurant at Century Square last Tuesday (May 3).

His wife had ordered ikan assam pedas, vegetables and white rice from Punggol Nasi Lemak and found the centipede nestled under the fish.

The Stomper said that his wife was then overcome with nausea and an ambulance was called.

Mr Mohamed also came down to the food outlet when his wife told him what had happened.

He told Stomp over the phone that when the staff had been alerted to the centipede, they simply offered to refund the $5 paid for the meal.

"It's not about the money. What if anything had happened to my wife?"

After paramedics arrived on the scene, Mrs Mohamed was sent to Changi General Hospital where she was treated for her nausea and vomiting.

Mr Mohamed  said that the doctors said it was "something like food poisoning" and that she was discharged after eight hours.

The couple have since lodged a report regarding the incident to the NEA and the police and hope that something can be done about this.

"My wife is traumatised by the experience and is scared to eat out now."

According to The New Paper, an NEA spokesperson said that no hygiene lapse was found at the stall and that the vendor was reminded to practice good food and personal hygiene, and to ensure proper housekeeping and storage of food.

A spokesperson for Punggol Nasi Padang said that they have apologised to the family and that more stringent checks have been implemented across all outlets.

"That said, we are confident that our food is clean," said the spokesman in a phone interview with TNP.