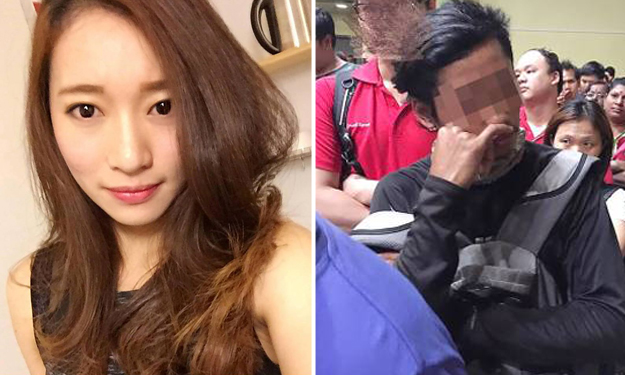 A Malaysian beauty has made headlines for how she successfully caught a man who had allegedly groped her at Woodlands Checkpoint despite his attempts to flee.

According to Shin Min Daily News, the incident took place on Mar 11 at around 7pm.

Ms Dong, a 25-year-old who works as an accountant in Singapore, had been on her way back to Malaysia like she did every weekend.

She said, "I felt something at my private parts and initially thought it was other people's belongings brushing against me.

"However, I still felt something following me despite dodging left and right. Hence, I immediately turned around and asked the guy behind if he had touched me."

A furious Ms Dong said that while it was normal to be pushed around when it was crowded at the Customs, she noticed that the man was carrying his backpack over his chest and using it to hide his hands.

Ms Dong yelled and the man started to flee.

It was then a kind-hearted man, 34-year-old Mr Lee, came forward to say that he had seen the man trying to get close to Ms Dong. He also agreed to be a witness for her.

"I firmly tapped the man on the back, but he continued to run away. In the end, I managed to successfully hold onto his backpack."

The sweet and demure-looking Ms Dong then asked a friend she had been with to watch the man, before telling Customs personnel about what had happened. She also called the police, who arrested the man.

Police confirmed the incident and said that investigations are ongoing.