When the party doesn't stop even at parenthood and their 40s 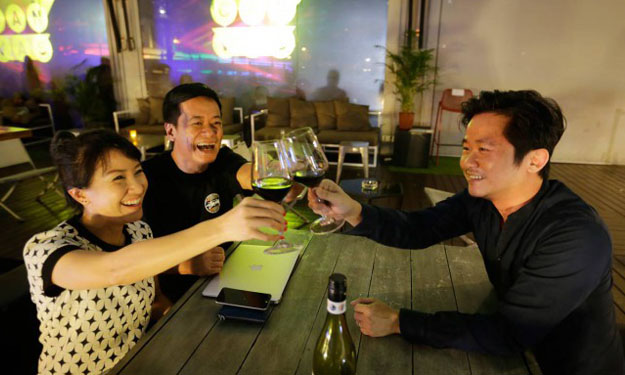 After housewife Michele Ng's son Awan sat his PSLE five years ago, the dormant party animal in her came roaring back to life.

She and her 49-year-old husband Simon started partying more, sometimes on consecutive nights, with a group of like-minded "party animals" at clubs such as Bang Bang and Club Kyo. She would sometimes return home after daybreak toting breakfast for the family, and the couple have also vacationed with their friends in clubbingfriendly places such as Phuket and Bali.

"It was time for us to enjoy (ourselves) because the kids are growing up," says Mrs Ng, 47, who has two older step-children in their 20s.

When the children were younger and needed more hands-on care and supervision, she opted for sedate drinking sessions at friends' homes or in pubs.

Since her inner party animal came out of hibernation, the partying has also become a family affair. Mrs Ng and her husband, who works in IT, party with her stepchildren, events manager Euphoria, 23, and Cornelyus, a 27-year-old relationship manager in a bank, a few times a month.

It was a gradual process, with casual invitations to meet at clubs if they were all out at night.

Cornelyus acknowledges it was initially "weird" to party with his dad and step-mum as drinking is often a taboo subject in Asian households.

The couple advocate safe drinking and Cornelyus and his sister eventually got used to partying as a family, besides clubbing with their own friends.

"In a way, it's quite good for family bonding," says Cornelyus.

"Sometimes, people are more open to talking about personal stuff such as relationships," he adds, quipping that another bonus is that mum and dad foot the alcohol bill on their nights out together.

But Awan, 17, does not share his parents' liking for the nightlife, so mother and son bond instead over sports such as badminton. As a result, Mrs Ng has cut down on partying in recent years to spend more time with Awan, who will enlist for national service this year.

Although many parents seem to lack the energy or inclination to go clubbing, especially if they have young children, Mrs Ng is one of a number of parents who keep up their nightlife interests while prioritising their children's needs.

Partying can also be a way to retain one's identity as a parent and avoid being subsumed by the demands of raising children.

This is the case for former journalists Cara Van Miriah, 44, and Ivan Lim, 49, who are nightlife veterans of more than two decades.

Co-founders of an editorial services firm, Typewriter Media, the couple, who have a 10-year-old son Alexandros, have reported on the clubbing scene and written newspaper columns and books related to the nightlife scene.

Like many aspects of parenting, it is part of a balancing act for them.

Enjoying the nightlife is "something I wouldn't change, whether single, married or as a mum", says Ms Van Miriah.

"For me to be a happy parent or person, I need to maintain a balance and that means keeping the lifestyle I've been used to since I was young. Why raise a kid as an unhappy parent? I believe he will grow up to become equally unhappy."

The couple say good organisation and planning are key to juggling work, play and parenting.

Most weekends, the couple travel to destinations such as Kuala Lumpur or Jakarta, mixing business and partying, while their son stays with his paternal grandparents. Occasionally, when they travel for work, he goes along, together with their domestic helper.

Mr Lim says that his friends know not to ask him out on weeknights if it interferes with his "football mum" duties.

"It's usually partying during the weekends now, when it used to be a nightly affair. Nowadays, I drive our son to school in the mornings, so it is prudent to remain sober the night before," he adds.

A sense of parental responsibility is also foremost for other parents who are active in the nightlife scene.

Mr Ng, who is in his 40s, is conscious of the need as a parent to set a good example: "You can't go home reeking of alcohol or drunk."

In his younger days, "drinking like there's no tomorrow was part of partying hard. Now, it's easy drinking", he says, adding that he drinks much less than the half a bottle of vodka he used to be able to put away in a night.

Advertising director Daniel Chan, 43, can be seen once or twice a month partying with Mr Ng at Canvas. Before becoming parents, the pair used to party a few times a week with their group of friends.

Mr Chan, whose sons are aged nine and four, says there is an "opportunity cost" to partying as a parent, especially after children turn three.

"Once they reach the age when they can communicate, you have to spend time communicating with them, which translates to quality time," says Mr Chan, who reads to his boys and puts them to bed.

Despite the "energy-sapping" demands of parenting, he sees the benefits of making the effort to go out.

He sometimes parties with his wife Kris, 40, who is also an advertising director, as it is a way for them to bond.

"Parents should find the time to do what they enjoy. It feels good when you feel you're still in control of your time, rather than letting parenthood and work dictate everything," adds Mr Chan.

Besides, a night at a club comes with a cosy, house music-laden dose of nostalgia.

"We make an effort to party because it makes us feel younger," he says.

This article was first published on Jan 03, 2015.
Get a copy of The Straits Times or go to straitstimes.com for more stories.