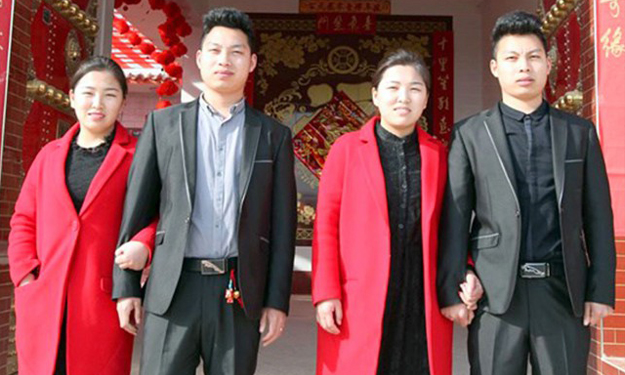 Is it possible for twins to marry another pair of twins without being able to tell their spouses apart? The answer is yes.

For twin brothers Zhao Xin and Zhao Xun, who live in Shanxi, China, mistaken identity has been a problem since young.

According to South China Morning Post, the two have constantly been told by relatives and friends about how much they look alike. Apparently, even their voices sound so similar, it's uncanny.

For their wives, the similarity has also proven too much that they have had difficulty telling their husbands apart.

On the day of the couples' wedding, parents of the twins had to check several times that they married their children to the right person.

To solve the perceived problem of mistaken identities, the Zhao brothers have reportedly decided to go for plastic surgery.

It all began when one of the brothers went for a walk after dinner and found himself holding hands with his sister-in-law by mistake, according to South China Morning Post.

On Thursday (April 14), media reports said that the twin brothers are making "slight adjustments" to some parts of their faces so that they will be easier to distinguish.