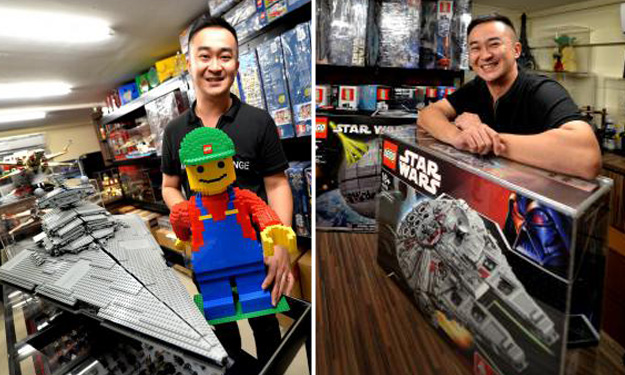 Lego's The Ultimate Collector's Millennium Falcon - the iconic spaceship piloted by Star Wars character Han Solo - is so sought after that fans around the world are willing to pay top dollar for it.

Here in Singapore, Mr Johnson Lim, 35, director of Wu Fu Management - mother company of the Tai Wah coffee shop chainand Crown Brand abalone - has sold seven sets of the Millennium Falcon, which is worth $7,000 to $9,000 in the market.

He tells The New Paper on Sunday: "I bought many sets of the Millennium Falcon because I knew they weren't going to produce any more.

"They make only the smaller versions nowadays."

The Lego and Star Wars fan used to own 10 sets of the Ultimate Collector's Millennium Falcon over the past 12 years.

He is now left with two first-edition Ultimate Collector's Millennium Falcon Lego sets and one second-edition set - all three worth more than $5,000 each.

But he says he was not out to make a profit. He sold the seven sets to a close circle of Lego fans at cost price.

And it is going to take a lot of persuasion before anyone can convince him to part with the remaining three sets.

"The remaining three sets are all I have now," he says.

Also, even though the first and second edition are of the same model, the difference in prices is quite drastic, adds Mr Lim.

"The value also drops by 20 per cent if the box is unsealed or used."

Other than the Star Wars series, he also owns the Cafe Corner set, whose value has appreciated dramatically. Bought at £89.99, it is now worth £2,096.

Mr Lim fell in love with Lego when he was about nine years old.

He says: "I fell in love with the small bricks because I could build whatever I wanted, limited only by my imagination."

He started collecting when he was 24 and took pains to store his sets properly.

"I did not expect these sets to become so expensive because I was just collecting them as a hobby," he says.

"Over time, I learnt to wrap the boxes properly, buy acrylics to preserve the bricks and I even wrap the manuals." Lego's yearly appreciation: 12 per cent

What would you choose? A gold coin or a Lego set?

Ask any ordinary person and he will probably pick the gold coin.

No one would have expected the Lego Star Wars Ultimate Collector's Millennium Falcon, sold in department stores at $899.90 in 2007, to cost more than $8,000 this year, say economists.

CIMB Private Banking economist Song Seng Wun, 56, says: "Alternative investments like wine, fine arts or even toys may actually have been a better investment than conventional bonds or stocks.

"But remember, alternative investments carry higher risks but at the same time, bring in higher returns depending on the demand."

Properties, stocks and gold have always been seen as conventional and safe investments in Singapore regardless of year, says Mr Song.

According to British Daily The Telegraph, Lego sets kept in pristine condition have increased in value 12 per cent each year since the turn of the millennium, with second-hand prices rising for specific sets as soon as they go out of production.

Modern sets are performing even more strongly - last year's releases are already selling on eBay for 36 per cent more than their original prices.

Those who invested in gold received a 9.6 per cent annual gain over the past 15 years, while those who went with a savings account generated 2.8 per cent, according to investment company Hargreaves Lansdown.

Some Lego sets that once sold for less than £100 (S$210) now fetch thousands on the secondary market.

Mr Song says: "Non-collectors or non-fans will not see the fuss in collecting a Hello Kitty or Lego set. They will naturally choose a gold coin or a piece of diamond even though the value of these special metals or stones won't go up as much.

"Collectors tend to take higher risks, putting in the effort and money to purchase everything. In these cases, many collectors become wealthier than conservative investors.

"But would a person spend $300,000 on Lego then? It would've been more logical to spend the money on property where the value is bound to rise," adds Mr Song.

He also advises investors to adopt a diversified investment strategy of investing not only in conventional stock or property investments but also in other items like wine, watches, toys and comic books.

It may be a hit-and-miss for these unconventional investors because hindsight is not the only important factor.

Passion plays a huge role, too. It allows the collector to buy the items in the first place, says another economist.

Barclays economist Leong Wai Ho, 44, says: "It would've been better for people to invest in these toys rather than financial assets then because it exceeds the returns significantly."

He adds that people normally invest in toys or comic books because of their passion or love for it, not because of commercial reasons.

"Collectors do it out of passion and these examples show us that passion can sometimes reward people financially," he says.

Yes, it is tough to predict whether an item under $10 now may cost up to $1,000 in the future but that is the beauty of collecting, economists say.

"Who knows, if you buy a recent wine vintage now, it may become a premium upon purchase in the future," says Mr Leong.

This article was first published on January 10, 2016.
Get The New Paper for more stories.