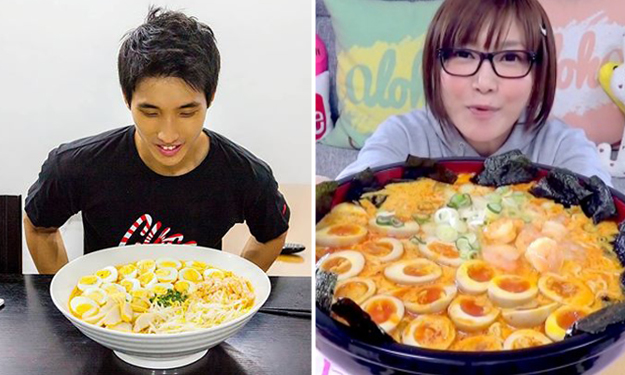 Ever wondered who has a bigger appetite -- Singaporean personal trainer Zermatt Neo who wolfed down 4kg of chicken rice or YouTube star Kinoshita Yuka who finished 4.3kg of Singapore laksa?

Well, 28-year-old Neo seems to be intent on proving himself as the bigger eater.

Stomper Andrew alerted us to how Neo had replicated what Yuka did -- except that he bumped the amount up to 4.5kg of laksa instead.

According to Neo, the challenge took him 33 minutes.

He also wrote on his Facebook page: "It actually tasted pretty good despite the fact that I used instant Laksa. Yes it's heavier but definitely not as rough as the chicken rice. Video coming soon!"

Stomper Andrew said: "Zermatt talks about the challenge in this forum said he took 33 minutes to finish in total and that he even got diarrhea."

Neo is a competitive eater who shot to fame when photos of him finishing 10 servings of rice and a whole chicken in slightly over 29 minutes went viral.

His YouTube channel also features videos of him gobbling down, in separate sittings, 150 sticks of satay at Lau Pa Sat, 100 gyozas at home and 50 chicken wings at WingStop.

As for Yuka, the petite Japanese girl became a hit with netizens when she slurped down a gigantic bowl of Singapore laksa and gushed about how yummy it was.

View photos of Neo's latest challenge in the gallery below.

S'pore guy wolfs down 4kg of chicken rice in one sitting