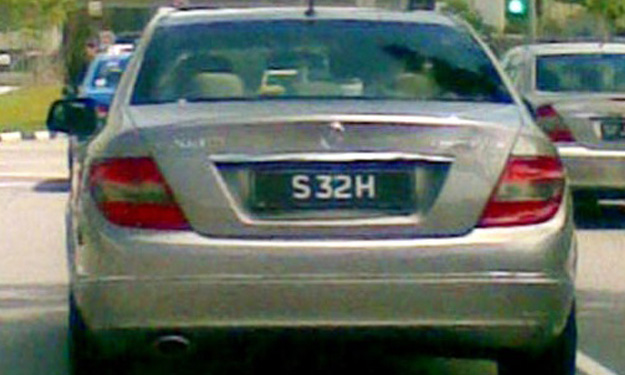 It costs more than an average car and is worth as much as a new five-room flat in Sengkang.

The bidder who won is a local businessman.

Car dealers The New Paper spoke to said the plate number was able to fetch the high price tag because single-S plate numbers are extremely rare.

Car dealer Ivan Lim said: "The market value for a single-S car registration number is priced around $300,000. So I am not surprised by the amount the plate number was sold for."

A vehicle owner is allowed to keep a licence number as long as the fees and paper work are in order, and the number is registered to a vehicle.

Mr Lim, who has over 30 years' experience in the industry, said the S 32 H plate is the 22nd licence plate to be registered in the private vehicle market in Singapore.

He added that the single-S vehicle numbers from one to 10 are currently being used for government or official vehicles.

Mr Bobby Chng, 50, a car dealer with Eurospeed Auto, said: "Once (such plate numbers) come out in the market and are bought, they will not come out again.

"People are always looking out for them, and they are very rare."

Mr Chng estimated that there are only 20 single-S registration plates left in Singapore, with just five up for sale.

The rest from that era are probably discontinued because most people back then would not have chosen to pay extra to retain the licence number, he added.

Director and head of Knight Frank's auction department, Ms Sharon Tan, said the seller of S 32 H was happy with the outcome of the auction.

She added that the seller is a prominent person in Singapore but declined to reveal more.

Ms Tan said the starting bid for the licence number, which was first commissioned about 70 years ago, began at $280,000 and saw three active bidders in the auction.

A local businessman in the aluminium industry eventually won with the final bid of $335,000.

A check on the Land Transport Authority's (LTA) OneMotoring website showed that the licence number is currently registered to a Mercedes Benz C180.

In 1997, two brothers were in a seven-year tussle over ownership of car registration number S 333 P.

They took their case to the High Court, but it was dismissed as the judge said he could not make an order to transfer the registration numbers due to a technical point with LTA's rules.

Mr Chng said that the business for vintage and unique car plates is thriving in Singapore as Singaporeans are car lovers who are particular about their cars and licence plate numbers.

"Singaporeans don't look only at the car, they also look at the car number. For the super rich, their $1.5 million sports car can't just have a normal plate. They need a nice or unique number to go along with it because it is symbolic of their status," he said.

"For other people, they might buy a 'lucky' car plate number to change their luck."

He said that his dealership sells 10 to 20 such car plates a month, and it is usually the "rich and famous" who buy them.

However, it is not always the typical auspicious numbers and letters that are popular among clients.

Mr Chng said: "Older people would choose auspicious numbers like eight or nine. But the new generation is guided by fengshui or numbers that are significant to them, like their birthdate or house number."

He said the value of a car plate number depends on what the buyer is willing to pay and what the seller will accept. He said that he had heard of someone offering $1 million for plate number SE 1 X.

Repeated or consecutive numbers and alphabets or digits that form "words" like "E A5 Y" (EASY) are also popular, said Mr Chng.

"However, single digit plates with just the number one are naturally the most expensive of all, because everyone wants to be number one and be associated with the number," he said.

Bought by: A car trader for a Ferrari 250 SWB

Bought by: A tycoon for a 1978 Panther saloon

This article was first published on February 24, 2016.
Get The New Paper for more stories.