Sacked for reckless driving: Cabby who sped off after reversing into car at Redhill carpark 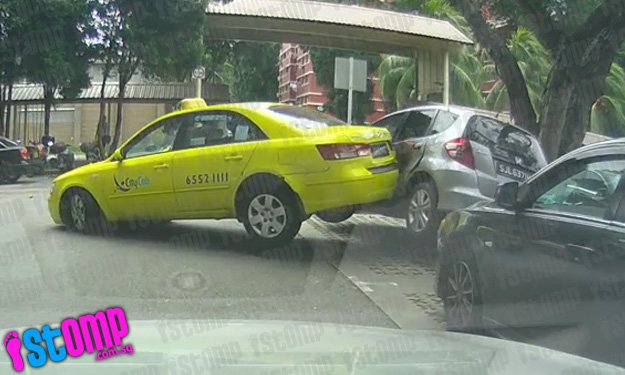 The CityCab driver who was caught on camera speeding off after crashing into a stationary car has been sacked for reckless driving.

It was earlier reported that the incident took place at an open-air HDB carpark in Redhill on Mar 26.

Facebook user Evon Lim had uploaded the footage online yesterday (Apr 4) and shared it with the Singapore Taxi Drivers' Facebook group, where it went viral with over 15,000 shares to date.

In the video, the cabby can be first seen reversing his taxi at a high speed, before crashing into the left side of a parked car. The impact lifted both the taxi and car off the ground.

The cabby then sped off afterwards.

In a statement to The Straits Times on Tuesday (April 5), ComfortDelgro's group corporate communications officer Tammy Tan said: "For driving recklessly, we have terminated the hiring agreement of the cabby."

Ms Tan added that "what was not captured on footage is the fact that he [the taxi driver] had stopped his taxi further down the road, went back to the scene of the incident and passed his particulars to a shopowner who knew the owner of the car."

"We are thankful that no one was injured in this incident and are assisting the owner of the parked vehicle with all repairs," said Ms Tan.