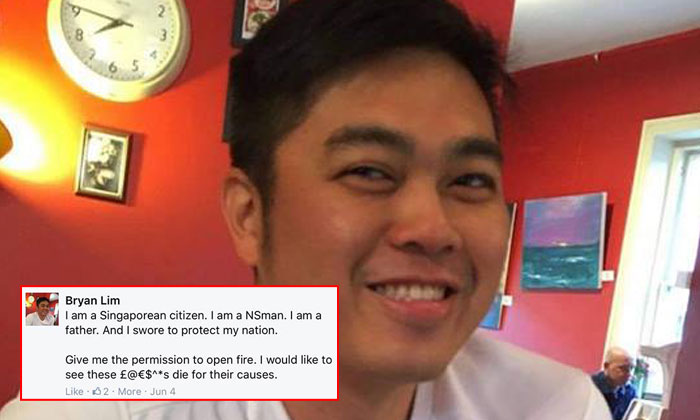 The police have confirmed that several reports have been lodged against a Facebook user who threatened to "open fire" on the lesbian, gay, bisexual and transgender (LGBT) community.

On June 4, the day of the annual Pink Dot event supporting the LGBT cause, the user, Bryan Lim posted the following comment on Facebook page We are against Pinkdot in Singapore:

“I am a Singaporean citizen. I am a NSman. I am a father. And I swore to protect my nation.

Give me the permission to open fire. I would like to see these £@€$^*s die for their causes.”

His remakrs sparked outrage and fear among netizens, especially members of the LGBT community following the horrific massacre at an Orlando gay club which killed 50 on Sunday (June 12).

The Singapore Police Force informed citizens that they are conducting investigations and clarified that Bryan Lim is not a Police National Serviceman amidst concerns and claims that he was one.

One alarmed netizen, Audi Khalid seeked a response from Canon Singapore after finding out that Lim was an employee there.

The company said it is investigating complaints against an employee and wrote on their Facebook page:

At Canon Singapore, we live by our philosophy of Kyosei, which we define as all people, regardless of race, religion, or culture, harmoniously living and working together for the common good.

"(Therefore), we do not condone violence in any form. Thus, we take this issue seriously and are looking into this matter."

Bryan Lim has since deleted his Facebook page and original post after posting an apology last night (June 13) and claimed it was all a "misunderstanding".

"I apologise for the misunderstanding. My words were strong. I did not mean anyone. I meant Bloomberg and foreign intervention in local matters.

"This was taken out of context. I hope this clears the air.

"I did not mean physical bullets nor physical death. I mean open fire in debate and remove them from Singapore domestic matters."

"The presence of individuals who harbour such thoughts and who publicly perpetuate intolerance based on their narrow perspectives of the world deeply saddens and concerns us."

"This clearly shows we should never take what we have for granted and continue to seek dialogue and opportunities to highlight to others the dangers of discrimination and intolerance."