Netizen responds to Loyang Green abuse case: 'I punched my dog in the face and punished her too' 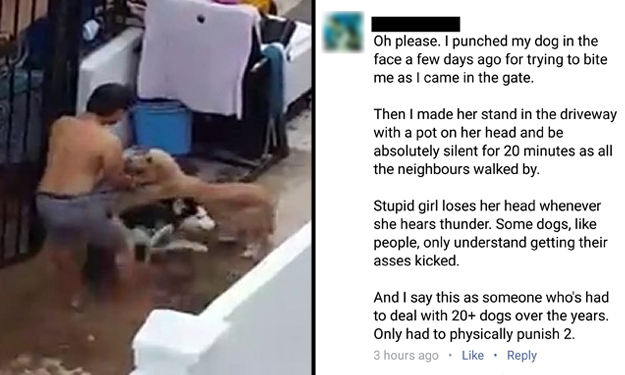 A Stomper has expressed concern over a netizen's claims of having punched his dog in the face for trying to bite him a few days ago.

The netizen had made the statement on Facebook, in response to the recent dog abuse case that took place at a Loyang Green residence on May 23.

In that incident, a man had been caught on camera punching and kicking a Husky, as well as dragging it around and lifting it by its neck on a leash.

The Husky was subsequently removed from the man's home by the Agri-Food and Veterinary Authority of Singapore (AVA) and placed under the care of The Society for the Prevention of Cruelty to Animals (SPCA).

The man in the video also apologised for his actions and gave his side of the story on Facebook.

Responding to a Stomp report about the original case on Facebook, the netizen had commented that he too had punched his dog in the face.

"Oh please. I punched my dog in the face a few days ago for trying to bite me as I came in the gate.

"Then I made her stand in the driveway with a pot on her head and be absolutely silent for 20 minutes as all the neighbours walked by.

"Stupid girl loses her head whenever she hears thunder. Some dogs, like people, only understand [after] getting their asses kicked.

"And I say this as someone who's had to deal with 20+ dogs over the years. Only had to psychically punish 2."

A Stomper had alerted Stomp to his remarks and said:

"We were disturbed to read this post on Stomp's Facebook timeline regarding Alan Chiam's case of the abuse of a husky yesterday.

"The person claimed that abuse is not a big deal and proudly admitted that he had just punched his dog in the face and made it to stand with a flower pot on its head.

"This is a red flag and needs to be looked into. We have highlighted this to SPCA on their website yesterday but yet to receive a response.

"Please help to share. Please. We are very worried for the dog in question."

SPCA responds to Stomp report: Dog that was punched and kicked by man removed from Loyang Green home

What a jerk! Man violently punches, kicks and lifts dog by its neck on a leash at Loyang Green residence