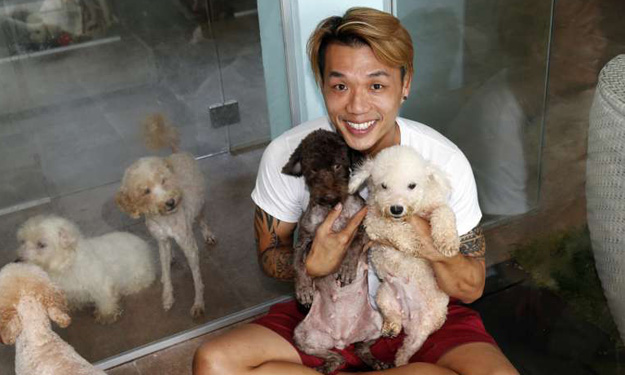 The mystery behind 18 dogs found wandering abandoned last week in various spots around the island has been solved.

The furry pedigree dogs, mainly poodles, belonged to the owner of a pet grooming school, and had been housed there as canine "models" for trainees to practise their scissor skills on.

The business owner, who spoke to The Straits Times last night, said he had been told by the authorities about two weeks ago that he could not keep the 30 dogs in his shop following complaints from neighbouring establishments about noise.

The man, who declined to be named, said he had been at his wits' end over what to do.

"I wanted the dogs to be able to find a home. That's why I left them in places where they could be found, even if there were CCTV cameras around," he said.

"I know it was stupid of me, but I was afraid that if I sent so many dogs to one rescue group at the same time, they would be culled."

So on Wednesday and Thursday last week, he left the 18 dogs in various places - such as an industrial park in Yishun, and in Tampines, Sengkang, Upper Serangoon and Petir Road - where he thought people would find and adopt them.

He stressed that the decision to do so had been his alone - he had told co-workers that he was giving the dogs to an animal welfare group, which he did with the remaining 12 dogs.

Posts on Facebook about the abandoned dogs last week which were "similarly groomed" caught the attention of animal welfare volunteer Derrick Tan, who runs animal shelter Voices for Animals. He worked with another animal welfare group, Ocean Rescue, to retrieve the animals.

Mr Tan, 35, said: "On Friday morning, the business owner called me and said that he left the dogs there as he did not know who to turn to for help, and that he had 12 more dogs that needed to be rehomed."

The owner has also made a one-time donation of $500 each, to Voices for Animals and Ocean Rescue group.

But Mr Tan pointed out: "Even though his intentions may be good, this shouldn't happen as these are domesticated dogs which may not cope well on the street."

People should instead turn to animal welfare groups or the authorities for help, he added.

Groups which have taken in the dogs say that although they smelled bad and some had skin issues and long nails, they showed no signs of abuse, and appeared generally healthy and well fed.

Twenty-two of them are now with Voices for Animals, and Mr Tan said they are in better condition compared with other dogs he has rescued in the past.

When The Straits Times visited their temporary home in Bukit Timah yesterday, the animals - among them poodle crosses, a maltese, shih tzu and cocker spaniel - were energetic, friendly and showed no fear of humans.

The other dogs are with groups including the Singapore Society for the Prevention of Cruelty to Animals (SPCA) and the Animal Lovers League.

In response to queries, the Agri-Food and Veterinary Authority of Singapore (AVA) said that pet abandonment is a form of animal cruelty. "AVA condemns acts of animal cruelty... and investigates all feedback on cruelty," it said.

It is working with animal welfare groups to investigate the case.

Meanwhile, things are looking up for the 30 abandoned pups, as the groups which have taken them in have pledged that the dogs will be cared for until they can find new homes.

Said Dr Jaipal Singh Gill, SPCA's acting executive director: "We will embark on finding loving homes for these dogs once our investigations are complete."

Voices for Animals will be putting its charges up for adoption this weekend at the open field at 11 Pasir Ris Farmway 2, from 1pm to 5pm. For more information, e-mail vfasin@gmail.com.