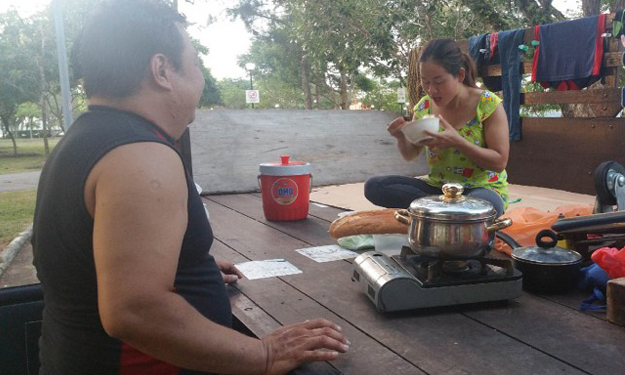 The man who hit the news in March for living on a lorry with his pregnant wife was detained early this month, for failing to appear in court thrice for a lawsuit over his ex-wife's alimony.

My Paper and Chinese daily Lianhe Wanbao reported in previous months about 44-year-old delivery man Wang Baohua, who lived like a nomad with his Vietnamese wife.

They cooked, ate, did their laundry and slept on the back of the vehicle at Changi Beach Park at night.

After his plight was reported, Mr Wang managed to get a two-room rental flat at Bedok North last month.

However, when he headed to the Immigration and Checkpoints Authority of Singapore (ICA) on May 5 to update his address, he was detained, Wanbao reported yesterday.

Mr Wang explained that he had lived at a rental flat in Macpherson many years ago but moved out to live on his lorry after that and had no fixed address. The court sent letters to his old Macpherson address and he did not receive them.

He was detained for 12 hours before a friend bailed him out.

Mr Wang said he was most worried about his pregnant wife while he was detained.

"I was alone and I couldn't call her. She can't speak Mandarin and I was worried that she wouldn't know how to go home. Thankfully, she met a good person who helped her."

Last Thursday, he went to court to address the alimony case with his ex-wife.

Her parents heard about her "hard life" here and asked her to return home.

Friends asked about her well-being and Vietnamese consulate staff contacted her.

When the news broke, more than 50 My Paper readers wrote in to offer items ranging from furniture and baby clothes to milk powder.

The couple, who thanked readers for their offers of help but turned down the gifts, have furnished their flat with items from friends.

"We have all the furniture we need. Thank you everyone for your goodwill but my house cannot accommodate so many items," said Mr Wang.

He added that his greatest wish is for his child to be born healthy and for his lawsuit to be settled smoothly.

Get My Paper for more stories.

Couple who lived on lorry move into rental flat

'I just want a roof for my baby': Couple who live on lorry stresses it's not money aid they need

S'pore man lives on lorry with pregnant wife: "As long as we have each other"