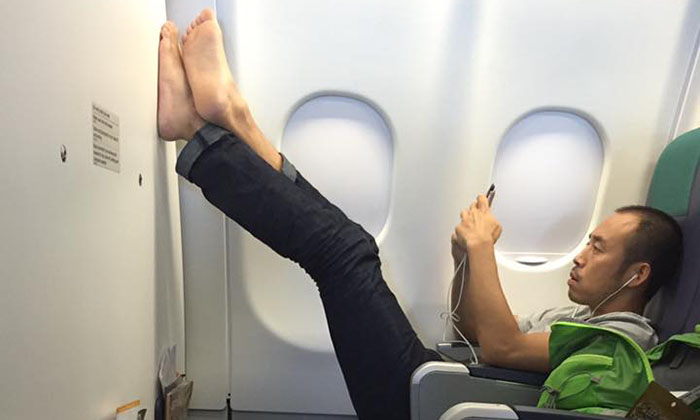 A passenger on a flight from Manila to Singapore at 3pm yesterday (June 5) saw a man rest his feet high up on a wall in the cabin of the plane.

The passenger posted a photo of the incident on Facebook and detailed the incident. Stomper R also alerted us to her post.

When contacted by Stomp, the Facebook user said that the man put his feet up before the plane took off.

"He continued doing so after take-off, so the stewardess politely told him to put his feet down," said the Facebook user.

But the man refused to do so, and asked the stewardess why.

When asked if anyone else spoke to the man, the Facebook user said:

"No. I guess it came across as an incident that was normal? Or that it would probably fall on deaf ears as everyone has their free will and I don't think airplanes has a particular rule on putting their feet up like that.

"I'm not trying to call that guy out in particular for people to look for him but I just hope to create some awareness about appropriate behaviour in public as we have to respect the people around us."