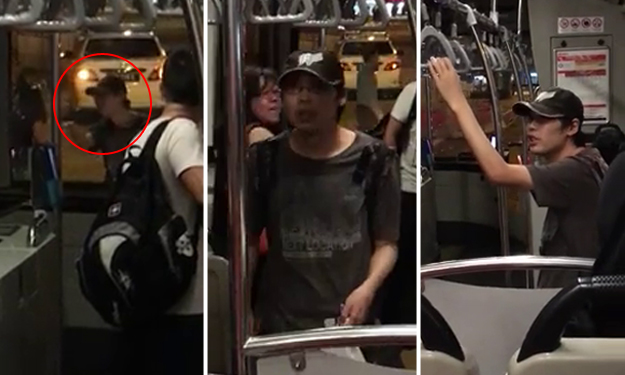 Police were called in after a man blocked a bus from moving off for 15 minutes and inconvenienced a whole busload of angry commuters.

It is unclear when or where exactly the incident happened. However, a Facebook video uploaded on Dec 29 briefly shows what happened.

According to a caption on the video, the man had been blocking the bus from moving off at a traffic light because he wanted to board it.

At the start of the video, a police car can be seen pulling up at the scene. Two officers then approached the man who was blocking the bus.

The bus doors finally opened for the man to come on board, as he appeared to be explaining his situation to the police officers.

When the man came up onto the bus, he faced criticism from other furious commuters. One woman scolded him 'stupid' and said that he was 'too much'.

However, the man continued arguing back.

Some netizens feel that the man should be arrested for being a public nuisance. Others say that the video only shows one side of the story.

One user commented, "Although [the] idiot is totally at fault for holding up the entire bus and wasting others' time, but I am witnessing more and more bus drivers who don't bother stopping or waiting for passengers [who are] waving and running for the bus, even when it's ;obvious that they saw them from the side mirror."

Stompers, would you be angry at the man if you were a commuter on the bus? What do you think of his actions?