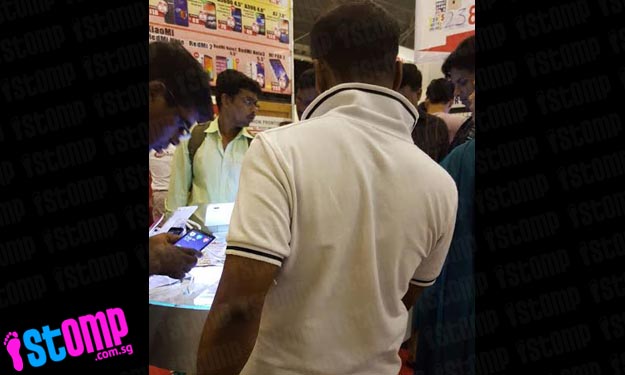 This story was contributed via WhatsApp. Click here to be part of Stomp's WhatsApp service.

A man was caught 'targeting' girls at the Singapore Expo yesterday (Apr 3) by purposefully bumping into them.

Stomper Ying shared her experience to warn other ladies of a potential similar encounter.

She said in an interview with Stomp:

"Hunting for washing machine but end up encountering this."

Referring to the guy in white polo tee, she said:

"He used his private area to touch me.

"He accidentally bumped into me, but the place was not packed at all."

She was shocked but did not react immediately, as she thought it might have been an accident.

She told her mother what happened, who suggested that they should follow him to observe what he was doing.

"I did, he targeted those young ladies or teens. Those that looked good from the back.

"He will purposely walk in front of the person to see her face, before doing the same things again to another girl!

The Stomper then decided to take photos of him.

"He kept pretending to look at items and check if I was still following him," she said. "He knew I was taking picture as I purposely took it very obviously."

"After 10 minutes he walked away, out of the hall.

"I just want to share this to warn ladies to be careful!"