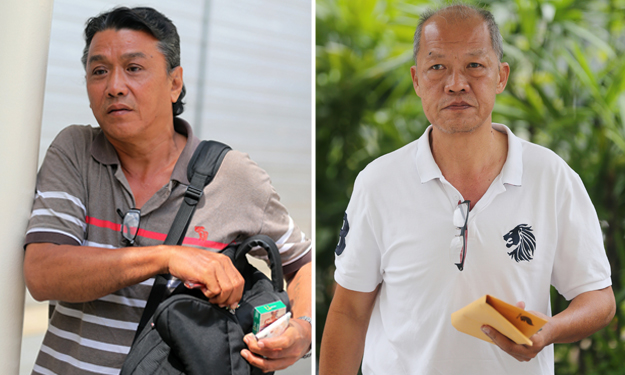 A Land Transport Authority (LTA) enforcement officer and an Uber driver were charged in court yesterday over fighting with each other and using abusive words.

Tan Hock Guan, 51, indicated his wish to plead guilty to both charges while driver Goh Kok Ling, 60, said he would plead guilty to the first and claim trial to the second charge under the Protection from Harassment Act.

Tan is accused of fighting with Goh at the Bugis Junction taxi stand along Victoria Street at about 7.15pm on Nov 27 last year.

He is also said to have verbally abused Goh in Hokkien with intent to cause distress to Goh.

Goh faces a charge of fighting with Tan as well as abusing him with a similar Hokkien vulgarity.

Tan's case is fixed for mention on April 29 when he is expected to plead guilty.

Goh told District Judge Ronald Gwee that he intends to engage a lawyer from the Criminal Legal Aid Scheme.

A pre-trial conference has been set for May 9.

Their police bail of $5,000 each has been extended.

A video showing an altercation between the two was posted online and went viral in a matter of hours.

If convicted of the second charge, they could be fined up to $5,000 and jailed for up to 12 months each.

This article was first published on April 16, 2016.
Get a copy of The Straits Times or go to straitstimes.com for more stories.

Uber driver and LTA officer continued fighting even after being separated: Witness