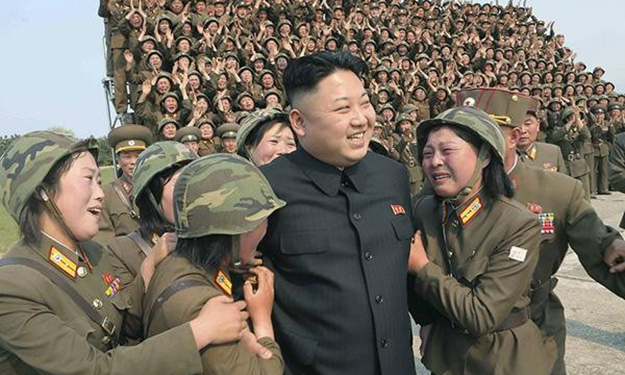 North Korean leader Kim Jong-un reportedly has a group of teenage girls who follow him wherever he goes to serve his needs.

According to Newsmax, the practice started with former leader and Kim's father Kim Jong-il, who had a group of girls known as the "Gippeumjo," or Pleasure Squad. He has now revived his father's 'tradition'.

The girls are allegedly picked at random by soldiers -- sometimes from their own school -- and forced to serve a small military circle of North Korea's elite, reports The Mirror.

Their medical histories are closely examined, and doctors even make sure that their virginity is intact.

The girls are not always called on for sex, but it reportedly does occur as well.

One woman told her story after she escaped to South Korea in 2010.

She said she was 15 years old when guards took her from her classroom without warning and asked her if she had ever had sex with a boy.

She spent a full decade servicing Kim Jong-il, the father of Kim Jong-un, who never called on her for sex, but she believes he would have if she had stayed longer.

According to Chosun, the women were apparently made to sign a pledge of secrecy in return for money and gifts.

Women who worked as maids got US$2,000 and home appliances and entertainers earned double that amount.