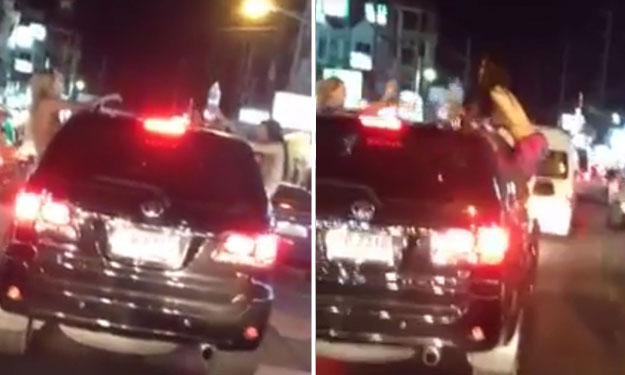 Two Western female tourists who went on a joyride topless in Phuket have been apprehended by Thai police.

Videos on social media showed the American and Austrian tourists sitting on the windows sills of a Sports Utility Vehicle (SUV) that was inching slowing along the streets of Patong on Jan 2 at 9pm, exposing their bare breasts for all to see.

In the bizarre video, American national Adrianna Martin, 20, and Austrian national Camille Prymann, 25, could also be seen dancing and drinking during their joyride.

They were arrested by the police on Sunday night after the car plate of the SUV was traced to a villa where they were staying, reported the Phuket Gazette.

Their protracted New Year celebrations in the land of smiles came crashing down at Patong Police Station where they were charged with indecent public exposure, the Telegraph reported, and fined 500 Baht (S$19.70).

A female police officer also gave them a lesson on Thai culture and morality.

"We explained to them why such behaviour was inappropriate and charged them for public nudity," Lt Col Sutthichai Thianpho of the Patong Police told the Phuket Gazette.

In Nov 2015, Thailand's junta launched a crackdown on vice and corruption in a "clean up Thailand" campaign to improve morality in the kingdom and the image of the military government.

Three bikini-clad sunbathers at a popular park in Phuket were forced by police to put on more clothes in the same month the campaign was launched.