Diner crept out by 'spongy, worm-like growth' in crabs from restaurant at Turf Club Road 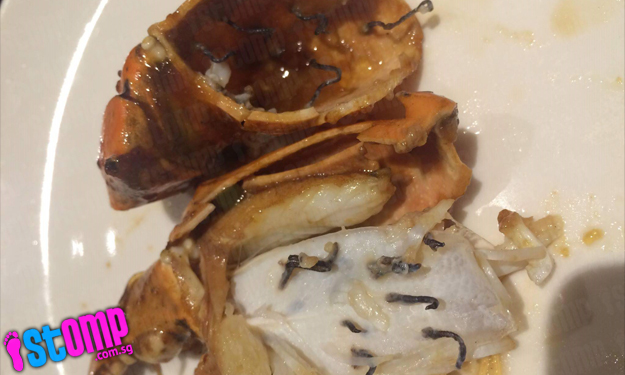 Stomper Goh and his family found these strange, black and worm-like growths in their Sri Lankan crab dish, which even restaurant staff could not identify.

The incident took place on Dec 12, at a restaurant at The Grandstand along Turf Club Road.

"My family and I went to the TungLok XiHe restaurant at The Grandstand to eat dinner on December 12, and we ordered Sri Lankan Crab with glass noodles.

"We found these black, worm like growths on the shell and cartilage of the crab. These growths have a sponge-like texture and were soft to the touch."

Goh said his family informed the waiters of what they saw. The waiters then told the chef, who initially said that they were probably tendons.

However, when the chef and manager came out to look at the dish themselves, they were shocked too, according to the Stomper.

"We confronted the Chef and the Manager, who both could not identify the foreign growth.

"In view of the recent seafood poisoning cases, we are extremely worried for food safety in Singapore."

Goh added that the restaurant later waived off the cost of the crab dish from their total bill.