Confession of a sewage cleaner: Everyone on my team has been covered in waste at least once 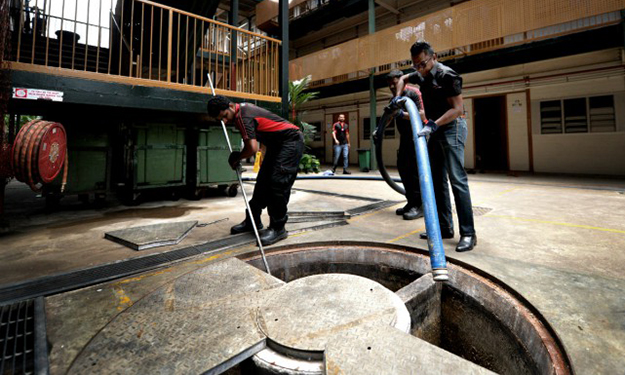 Few Singaporeans who value their olfactory senses will fancy a career dealing in faeces and urine.

But not Mr Abdul Jabar.

The 53-year-old has carved a niche in a "dirty job", cleaning sewage pipes, disposing trapped grease in septic tanks and clearing choked drains.

Being in this line means enduring what are possibly some of the most pungent odours around.

"Our business is to deal with dirty things. You just have to get used to it after a while," says Mr Jabar, who founded Asia Pacz around 25 years ago, when the company was still a construction contractor.

It switched to maintenance services 10 years ago when the business became more lucrative, partially because it is a job that few people want to do.

Although the chief executive officer leaves the job to his 70 men working out in the field, he still sometimes heads out to the field to inspect the work.

Mr Jabar says: "When I started out, I had to do a lot of the work myself. I couldn't take the smell at first but gradually I learnt to ignore it."

He recalls one episode while responding to a call of a leaking sewage pipe in a HDB toilet.

While he was in the toilet, the overhead pipe suddenly burst, covering Mr Jabar in pungent waste matter.

"The smell was very gross and the water was viscous and had a horrible brown colour. I almost vomited," says Mr Jabar.

But the job still had to be done.

After a cursory rinse with water, he and his men spent around four hours in that toilet fixing the pipes.

Mr Jabar says: "It's quite common, all my guys have experienced being covered in faeces at least once.

"You really need to be happy in this job in order to do it for so long."

The New Paper on Sunday joined Mr Jabar and his team on one of his jobs, observing them bravely remove a thick sludge - leftover food grease from a nearby kitchen - from a septic tank.

To control the smell, cleaners can choose to scatter a type of enzyme that would break down odour-causing bacteria in the sewage.

But no matter what they put in, Mr Jabar jokes that they will never be able to get rid of the smell completely.

Cleaning pipes and drains also means that they will have to use heavy equipment, including industrial vacuum pumps and high pressure water jets, to remove blockages.

With the increased threat of mosquito-borne viruses today, Mr Jabar wants to speak out against landowners who neglect maintenance in order to save costs. He reveals that private estate owners and some commercial malls, which he declines to name, are guilty of this.

Once, he had to remove a colony of dead rats that choked up a wasteline pipe.

"I've also had to remove dead cats and dogs from pipes and drains. Sometimes, we also find handphones that people managed to flush down the toilet," he says.

His company also works around the clock, maintaining a 24-hour hotline for when someone needs a quick cleanup.

Over the years, Mr Jabar has received plenty of memorable calls for help.

He was once even hired to flush out a snake that swam up a pipe and bit a woman while she was in the ladies' toilet.

Mr Jabar says with a laugh: "Oh, sometimes we feel like we are the emergency service of anything sewage-related."

SECRETS OF THE TRADE

1. Watch your step. Poorly maintained pipes, grease traps and drains can be slippery.

2.If you have to enter a confined space, such as a pipeline, make sure all dangerous gases have been vented away first and proper gas tests are conducted before proceeding.

3. Be careful when handling cleaning equipment. The high pressure water jet, for example, can easily cut through concrete.

Get The New Paper for more news.