Chinese tourists shovel up prawns with plates at buffet in Thailand 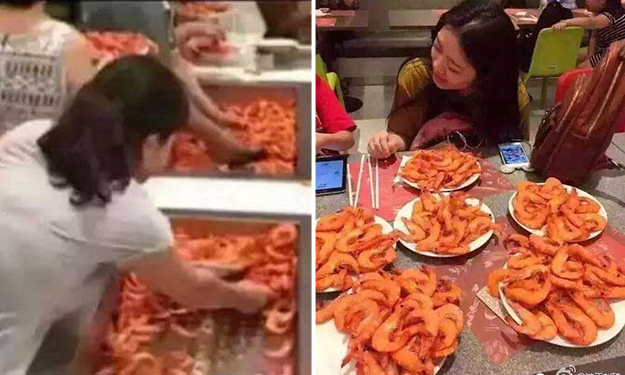 A video circulating on social media showed just how much a group of Chinese tourists love their prawns at a buffet in Chiang Mai, Thailand.

The video showed people shoving each other in order to scoop up as many prawns as they could on to as many plates with their two hands.

English-language Chinese website, Shanghaiist, reported that the hotel staff of this buffet were shocked by the greedy behaviour of these tourists because much of the food that was shovelled away was left uneaten.

The video on Shanghaiist's Facebook page has garnered over 2 million views with nearly 9,000 comments.

Many expressed disgust at the group's behaviour, and shared their own negative stories about Chinese tourists.

Those from China also commented on how "savage" the group's behaviour was.

Facebook user Jina Jiang, who is from Fujian, commented on the video post saying, "I don't know who's more savage... those old people trying to fill their plate with shrimps like there's no tomorrow, or that one lady with THREE plates pilled up, LOL."

However, there were some commenters who tried to be positive about the situation.

Facebook user Paradee Jee, from Thailand, said there have been awkward moments with Chinese visitors in Thailand from time to time but she thinks it is due to cultural differences.

She hoped that both sides will learn to understand each other better.

She said, "I am Thai and I am here to say that we Thai love the Chinese tourists".