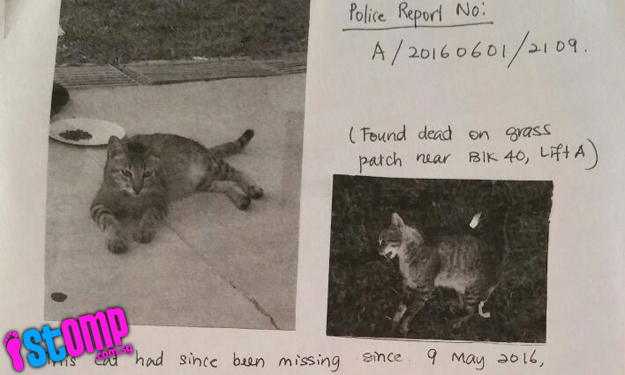 Stomper Angela was shocked to find out that a community cat in her estate at Telok Blangah Rise had died after returning from trip to China.

She only learnt of the feline's death through a notice that was put up in the area, stating that the cat had been missing since May 9.

Its carcass was found on May 27 on a grass patch near Block 40.

According to the notice, the incident is suspected to be a case of abuse or poisoning as the cat's mouth had been smeared with blood stains.

The notice also appealed for witnesses and said that a police report has been made.

"Shocked to see this notice pasted at our lift lobby.

"Hope there are no serial cat killers in our area.

"Why are people so insensitive to living animals who also deserve a space on Earth?

" Wish the government come up with stricter terms of punishment for such cruelty to animals that are unable to speak."