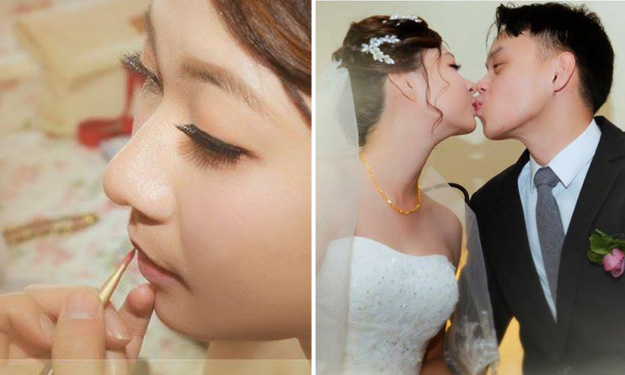 It quickly became the joke of the week for many, but the bridal studio behind those badly-taken wedding photos was not only willingly acknowledged the part they played, they spinned the laughable situation into an advertising spiel of their own.

In a Facebook post on April 13 (Wednesday), Feline Wedding posted four images compiled from the wedding of Ms Jaclyn Ying and Mr Kelvin Tang, which went viral earlier this week.

"Plan out a wedding photo shoot that flaunts your everlasting love with Feline Wedding, " the post read.

Ms Ying had shared some of their wedding photos in a post on Facebook on April 10 calling it a "public service announcement". She stated that she "just wanted to share some of these hilariously bad photos with everyone" without any intention of shaming anyone.

The photos, which were either taken at odd angles or edited with strange filters, quickly drew the attention of netizens all across Singapore, evening spawning a series of hilarious online memes.

Although the photographer and studio were not named, a netizen identified as Mr Chung Siew Goh said in a Facebook post on April 12 that he was the one who had taken the photos.

Calling the post unfair, he said that he had given the couple over 900 photos but they had chosen to highlight 20 unflattering ones.

Feline Wedding quickly followed up a day later by uploading new photos of the couple on their big day on its Facebook page.

These new photos featured the couple in more flattering angles and natural poses. Compared to the batch of photos released by the couple, the photos on Feline Wedding's post were also edited more professionally and did not feature any odd filters.

Commenting on its own post, Feline Wedding said: "We may not (be) the best but here we have done our best".

On Thursday, the company also apologised for the matter, adding that it would ensure all photos are checked and cleaned up before releasing them to clients in future.

"We are not trying to be famous from this post. In fact, we just wish to share better photos from the 900 (shots)."

They added that they had agreed to re-edit the couple's photos, but the couple chose to share the photos online before they could rectify the situation.

Many former customers left words of encouragement for the studio, and shared their own positive experiences with the staff there.

According to information provided by forummers on Singapore Brides, the bridal boutique has sold packages at its roadshows for prices ranging from $3,288 to $3,588.

One customer wrote that she was also given the option of having a photographer on her wedding day for an extra cost of $700.

Misunderstood genius? Because we don't know how else to explain this wedding photographer's photos

Photographer of 'hilariously bad' wedding photos defends himself on Facebook