From argument to bromance: Drivers yell at each other after AMK Ave 5 collision -- then hug and shake hands 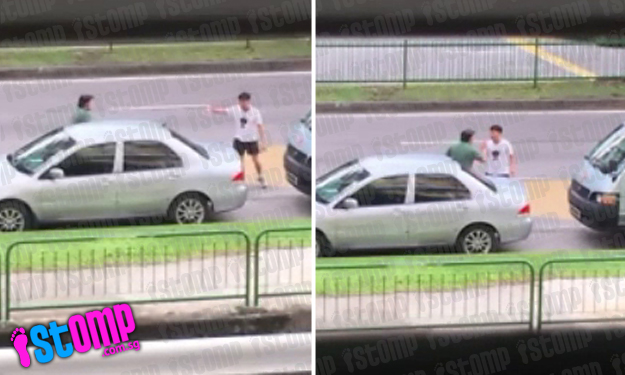 A middle-aged man and another man who looked to be in his twenties were arguing after an accident at Ang Mo Kio Avenue 5.

Stomper Jonah recorded the dispute and sent the footage to Stomp.

According to her, their vehicles, a car and a van, had collided and resulted in the accident.

In the video she sent, the middle aged man can be seen hurling a vulgarity at the younger male in the beginning of the video.

The younger man then retaliated by shouting back at him. Both men raised their voices as they confronted each other.

However, the younger man clad in a white shirt then proceeded to ask the older gentleman clad in a green shirt for a handshake and he obliged.

The man in the white shirt then went on to hug the man and gave him a pat on the back before checking on the bonnet of the van and the rear of the car.

After checking on the vehicles, the men exchange handshakes and hug each other again before returning to their respective vehicles.

In a message to Stomp, Jonah wrote: “What actually amazed me was how both parties settled off with a hug and brought peace.”

It is unclear as to what happened after the fight.