Another customer shocked by bill at nail salon -- and it's a whopping $586.36 this time 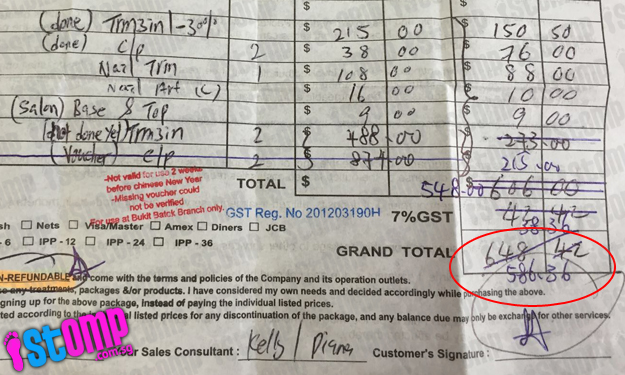 Stomper S was shocked when she ended up with a bill of $586.36 at a nail salon in Bukit Panjang Plaza on Jul 26 last year.

S said she had only planned to do a pedicure, but staff kept asking her to purchase packages.

She ended up paying for a 3-in-1 treatment, a nail treatment, nail art, top and base coats, a pedicure for herself and her friend, as well as two more 3-in1 treatment packages for future use.

S told Stomp, "The staff did tell me about the price before the procedures, but I was still shocked at how much it amounted to.

"After negotiating for very long, they agreed to give me a discount and charged me $586.36."

S said that she went back for a second visit to use the packages she had already bought, but staff continued asking her to make more purchases.

"I wanted to use the treatment package, but was told I needed to do a pedicure in order to use it.

"Then I had one treatment package left as I had bought three on my first visit, so they asked me to buy a pedicure for the next time too."