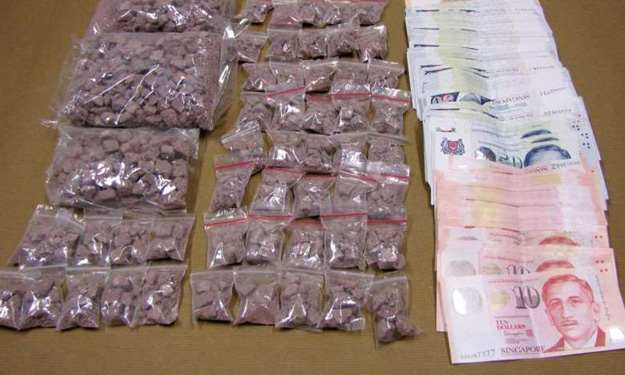 Five people have been arrested and more than 2kg of drugs worth an estimated $156,000 were seized in a Central Narcotics Bureau (CNB) operation on Thursday (March 24).

At about noon, CNB officers observed a car driven by a 47-year-old male Singaporean, who picked up a 43-year-old Singaporean man and a 21-year-old Indonesian woman.

The driver drove to a carpark in the vicinity of Lengkong Tiga in Bedok, where a suspected drug courier, a 29-year-old Malaysian man on a motorcycle, passed a plastic bag to the male passenger, who is a suspected drug trafficker.

Officers arrested all four for suspected drug activities, and recovered two bundles of heroin weighing about 950g from the plastic bag, along with $5,880 in cash.

They then raided the hideout of the suspected drug trafficker, where about 920g of heroin and four packets of "Ice" weighing about 30g were recovered.

Follow-up investigations led to the arrest of another suspected trafficker, a 41-year-old Singaporean man. About 400g of cannabis, 20g of "Ice" and 35g of heroin were found in his hideout.

Investigations into the drug activities of all suspects are ongoing. The Misuse of Drugs Act provides for the death penalty if the amount of diamorphine - or pure heroin - trafficked exceeds 15g.

This article was first published on March 25, 2016.
Get a copy of The Straits Times or go to straitstimes.com for more stories.